It was late spring and Gifu Prefecture was stirring awake after its long winter sleep. The sky was bright blue and the mountains lush green, but in their embrace lied farmlands that were still lifeless for the most part. Sad as that may sound, it was no ordinary part of Gifu that I was heading for. The UNESCO World Heritage Site of Ogimachi Village in Shirakawa-go is worth visiting in any season since it is home to hundreds of unique-style thatched roof farmhouses called gassho-zukuri. Translating to “hands in prayer” to reflect its steep triangular shape, gassho-zukuri houses can only be found in Shirakawa-go and the neighboring Gokayama region.

There are three gassho-zukuri villages in Shirakawa-go (Gifu Prefecture) and Gokayama (Tooyama Prefecture), but Ogimachi Village is the easiest to access and also the biggest. As I was a day tripper, Ogimachi Village was my only destination. While it is a pity I didn’t get to experience the more peaceful atmosphere at Ainokura Village and Suganuma Village in Gokayama, Ogimachi was thankfully not so crowded when I visited. Plus the village has some unbeatable views that make me recommend you not to skip Ogimachi still. 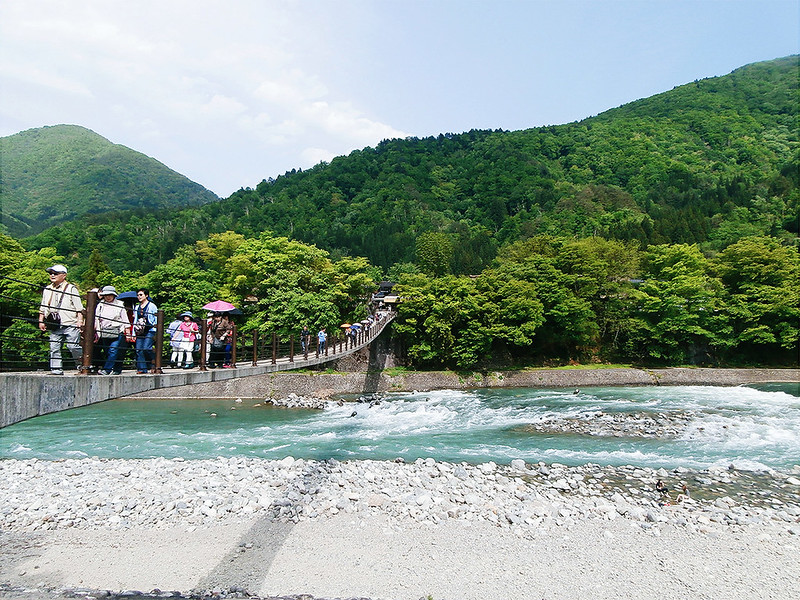 Thanks to its location in the Shogawa River Valley, Shirakawa-go guarantees you fresh air with a view of turquoise-colored Shogawa River running along the forested range of Mount Hakusan. Getting off the bus, I followed the other passengers out of the parking lot to Ogimachi Village entrance on the other side of the Shogawa River. Hanging above the river is Deaibashi Suspension Bridge, which is so narrow that it is impossible to stand back to admire the river view without getting in the way of other visitors. I stopped for a few snapshots of the river before stepping onto the pedestrian bridge and crossing without loitering around.

I decided to start from where there were probably most people and save the slower, more pleasant stroll for last. After waiting for a few minutes for the village shuttle bus near Wada House, I was whisked up to Shiroyama Viewpoint in no time. 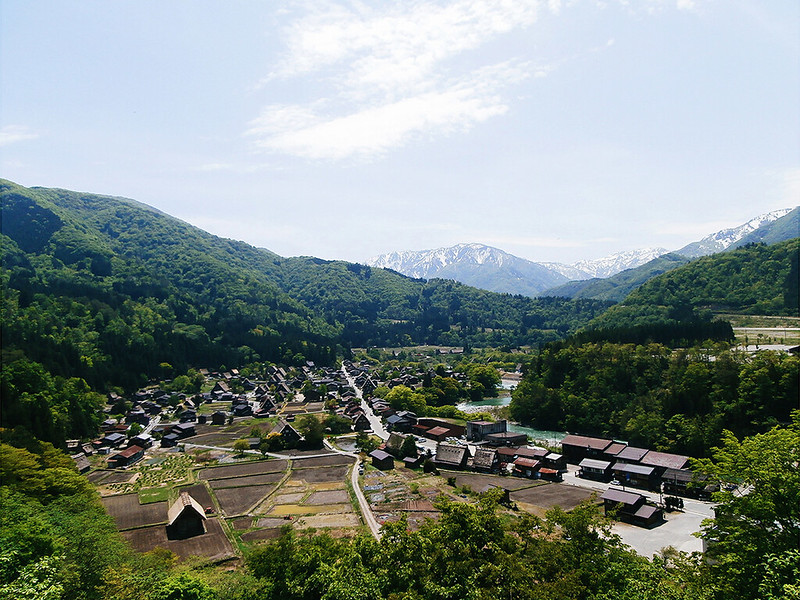 Shiroyama Viewpoint is located up a hill in Shirakawa-go, overlooking the whole Ogimachi Village. This is where everyone comes to capture the postcard-perfect view of the gassho-zukuri thatched roof houses among Mount Hakusan and the Japan Alps that has graced countless Chubu region tourism posters. Minus the cars and tourists, this is the one-of-a-kind view that has lasted for centuries and can’t be seen anywhere else. I imagine it must be even more breathtaking when the rice fields grow green or golden or become blanketed in white snow. 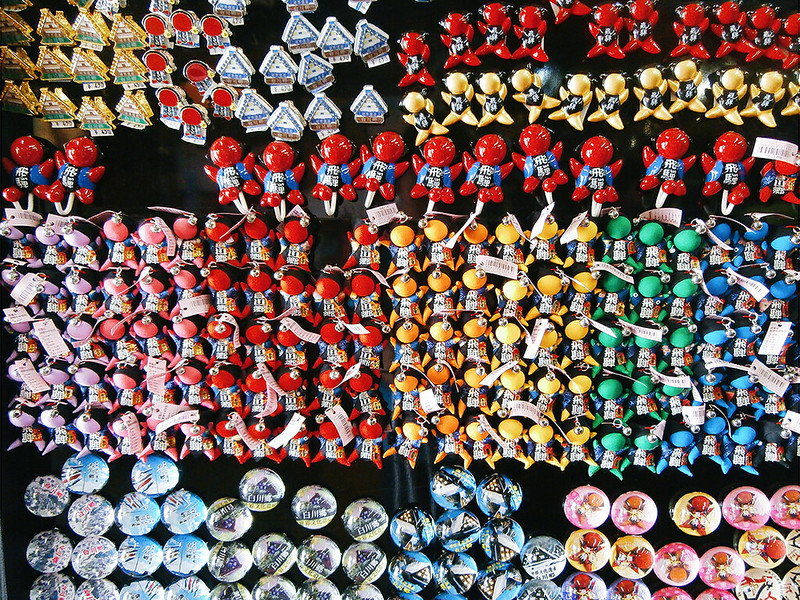 After poking into the small souvenir shop with the region’s colorful sarubobo dolls at Shiroyama Viewpoint, I walked down the hill back to Ogimachi Village. (You can walk up the hill to Shiroyama Viewpoint, but it was too hot that day and I would rather save my energy for village exploration.) 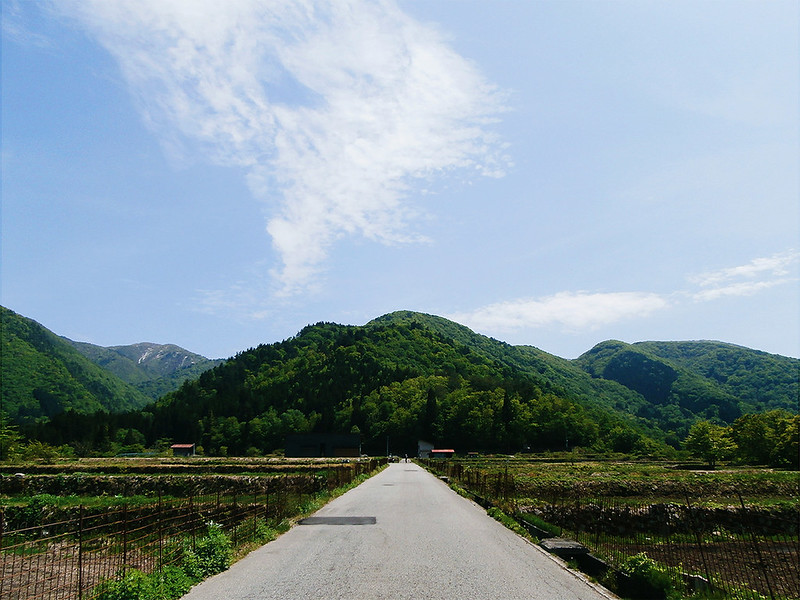 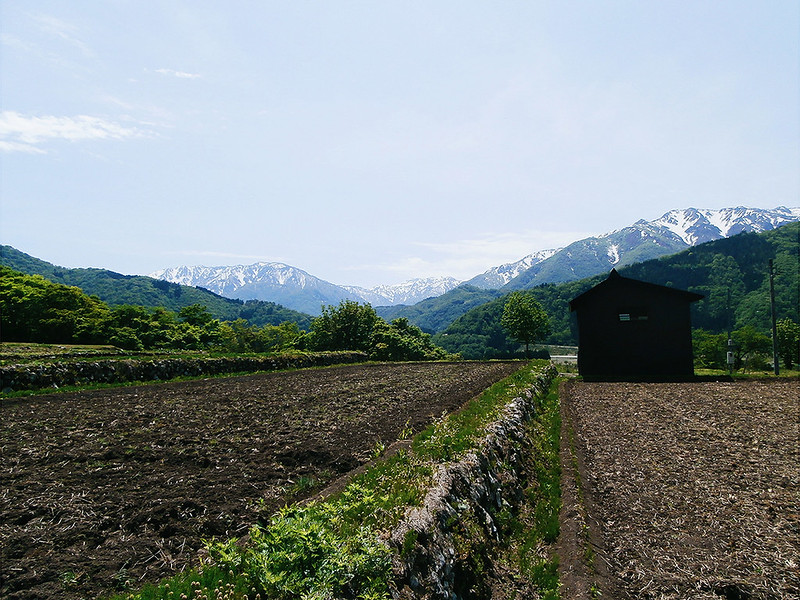 The walking trail was pretty nice with closer and clearer views of the mountains. If the land were greener, I would have spent a much longer time enjoying the views. 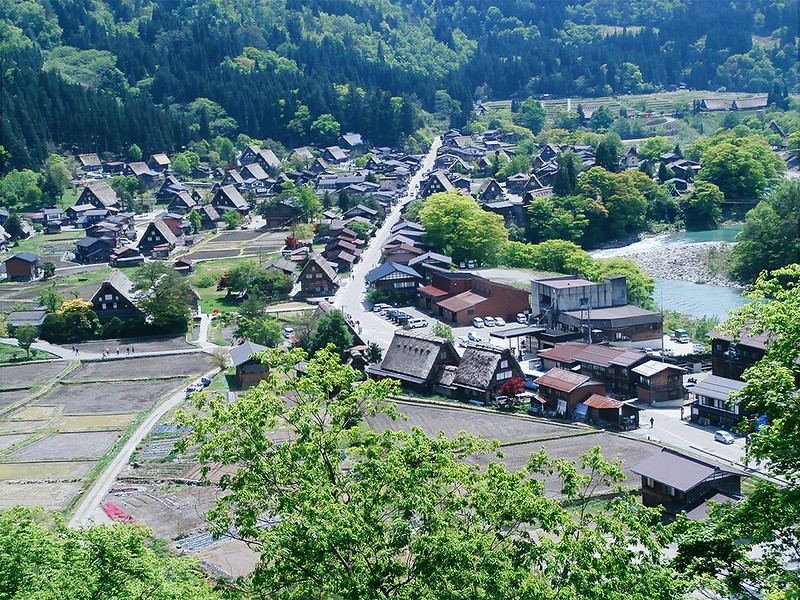 The trail leads down from Shiroyama Viewpoint into the residential area. Shirakawa-go Ogimachi Village is a living museum, some of the houses aging over two centuries. The villagers go about their usual routines. These routines aren’t untouchable, though. If you have enough budget and time, you can lodge at some of these farmhouses. The locals have turned them into minshuku or Japanese-style bed and breakfast. 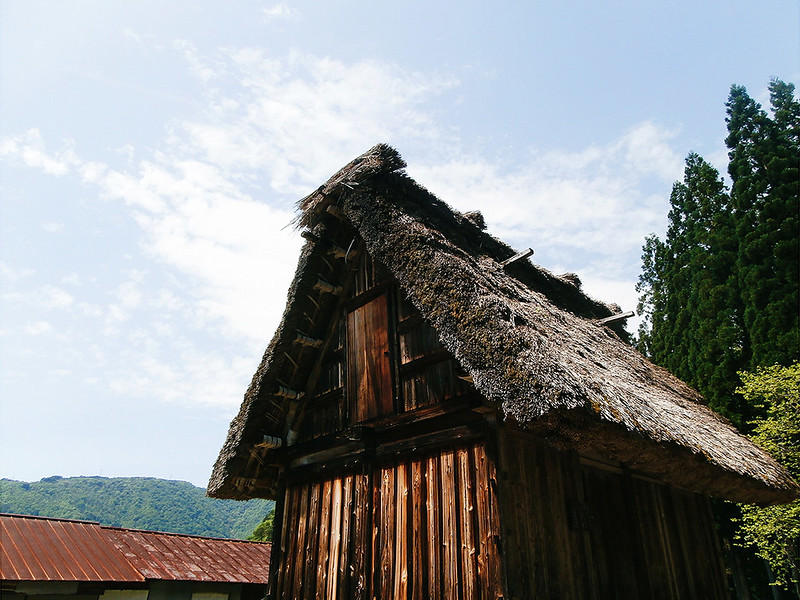 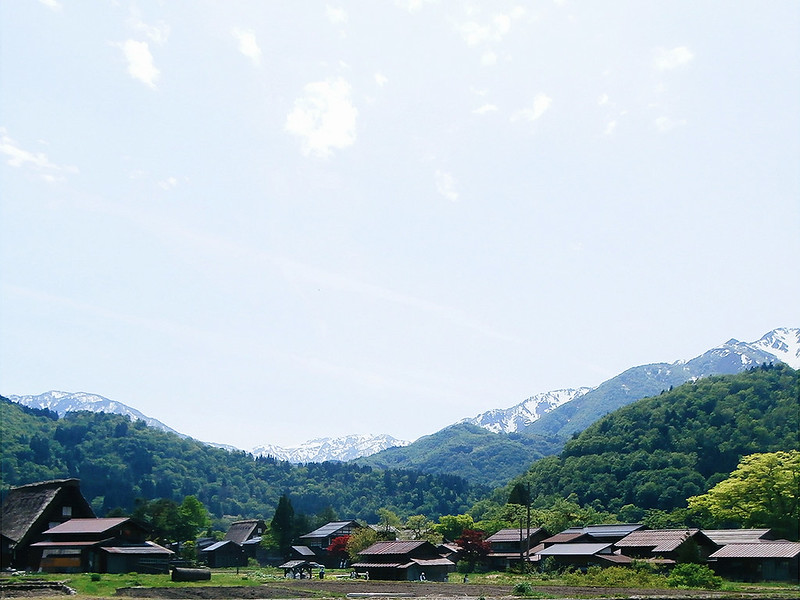 I took a closer look at the gassho-zukuri houses as I walked around Ogimachi Village. Of course, these 60-degree steep thatched roof houses aren’t designed just for aesthetics. Remember how Shirakawa-go area sees long winter each year? The steepness helps prevent the heavy snowfall from accumulating on the roofs and crushing them. 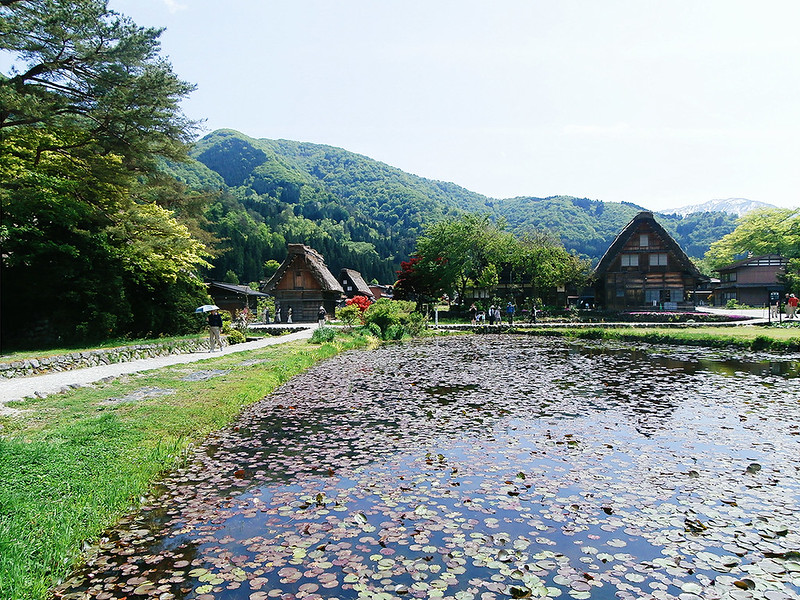 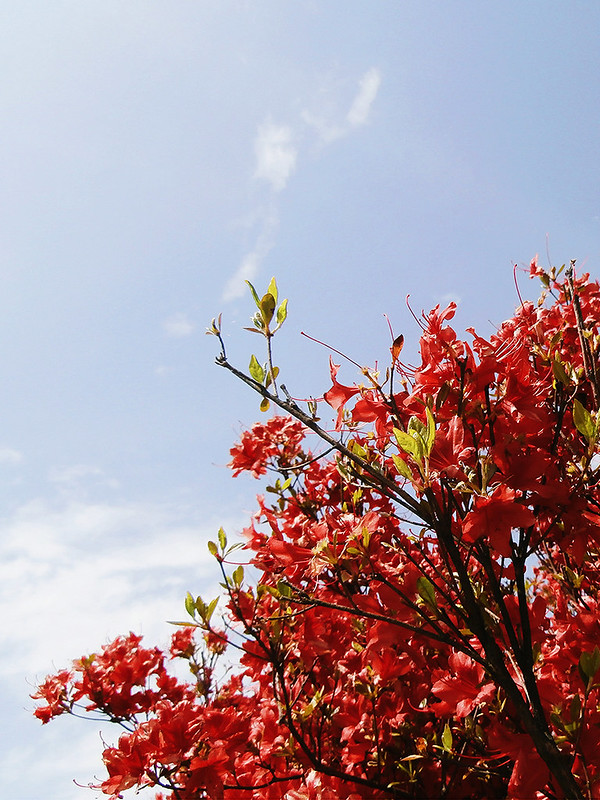 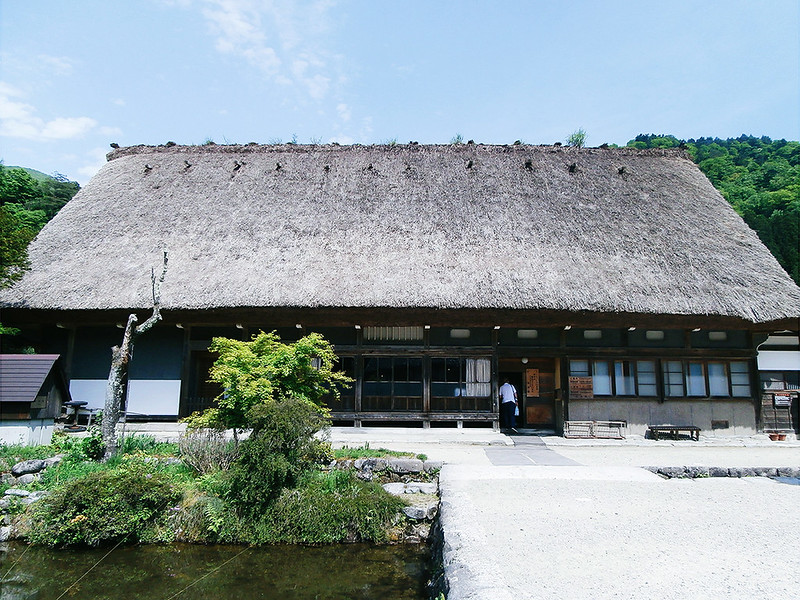 And that isn’t the only wisdom behind behind these iconic houses. I decided to bought a ticket to Wada House to learn more about gassho-zukuri. 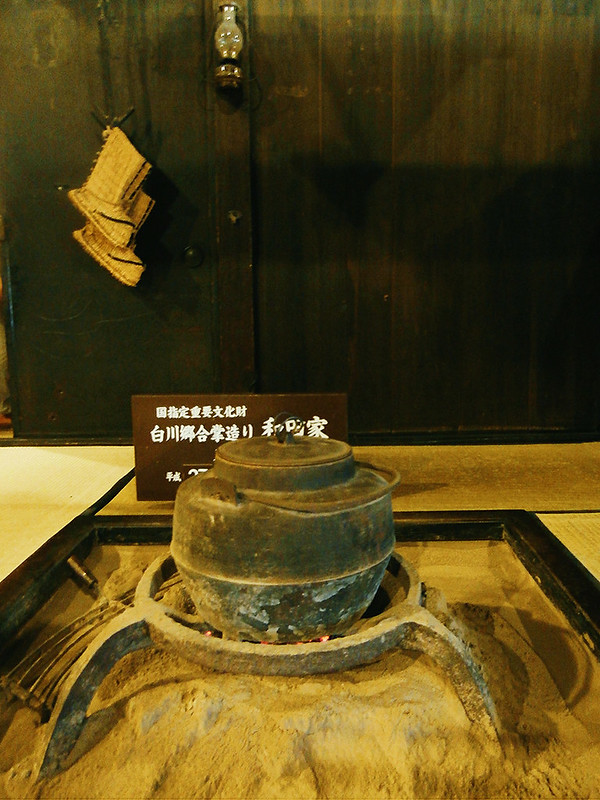 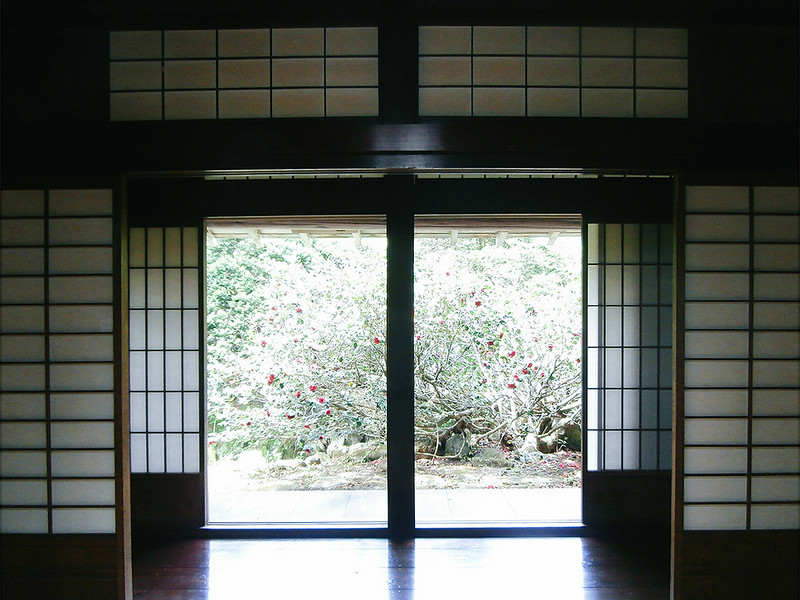 The largest gassho-zukuri house in Shirakawa-go, Wada-ke or Wada House belonged to one of the area’s most powerful and wealthiest families, Wada Family. The house is now open to the public as a museum where visitors can get a glimpse into Shirakawa-go’s bygone era. The necessities, including irori or the sunken hearth in the living room, are still on display. 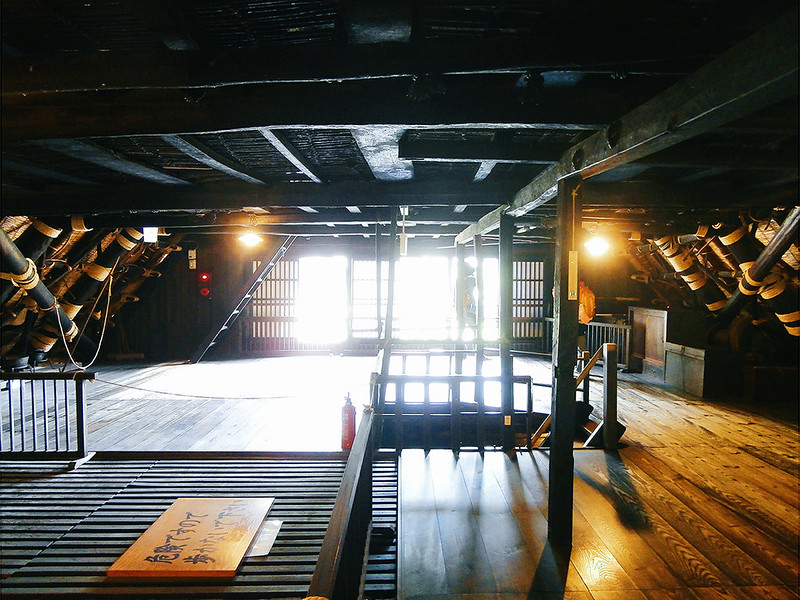 After walking up the steep staircase, I found the highlight of Wada House: the attic. 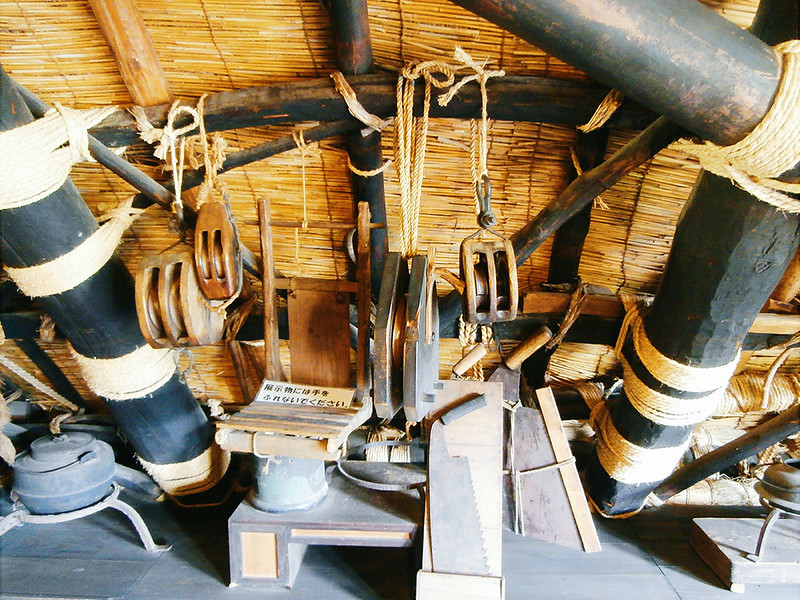 In the old days, Shirakawa-go villagers utilized the spaciousness under the thatch roof for silkworm cultivation. Now the space is used to exhibit old household items ranging from kitchenware to cold protection. 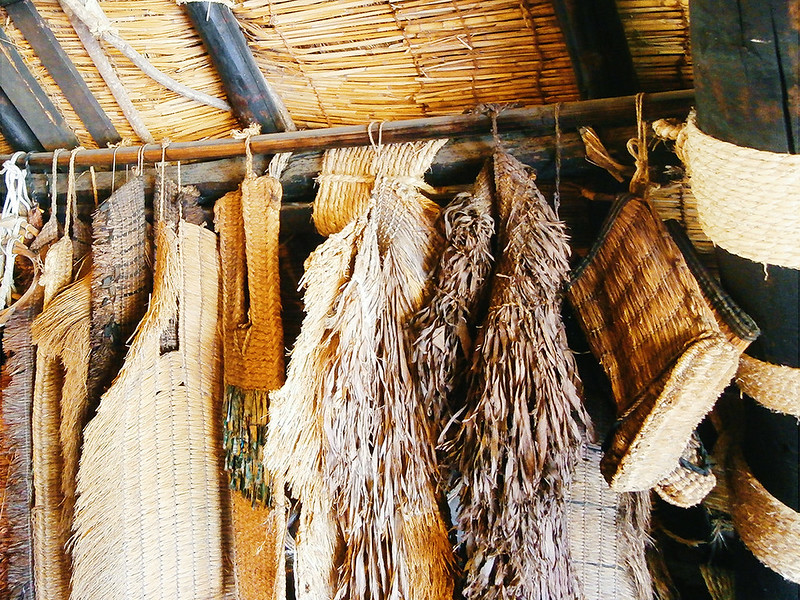 Did you notice that the roof was built without nails? Actually, no nails were needed at all for the whole gassho-zukuri structure. 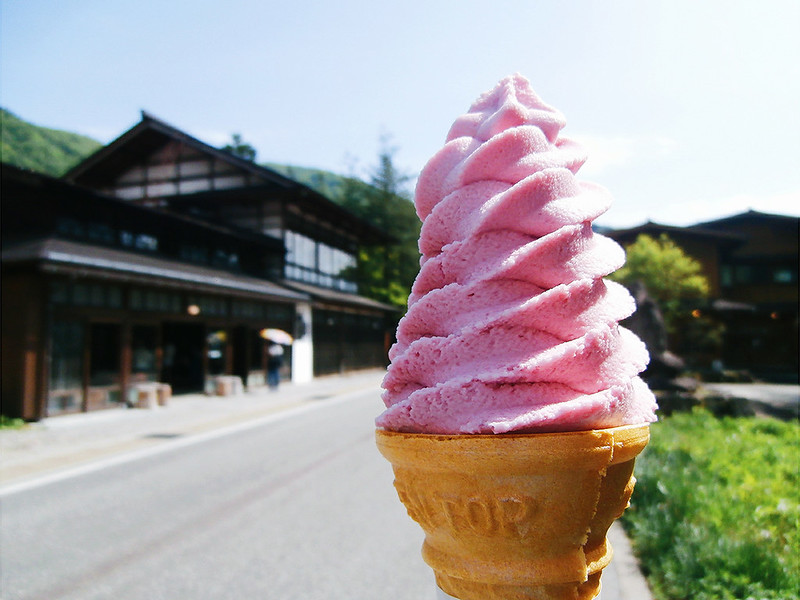 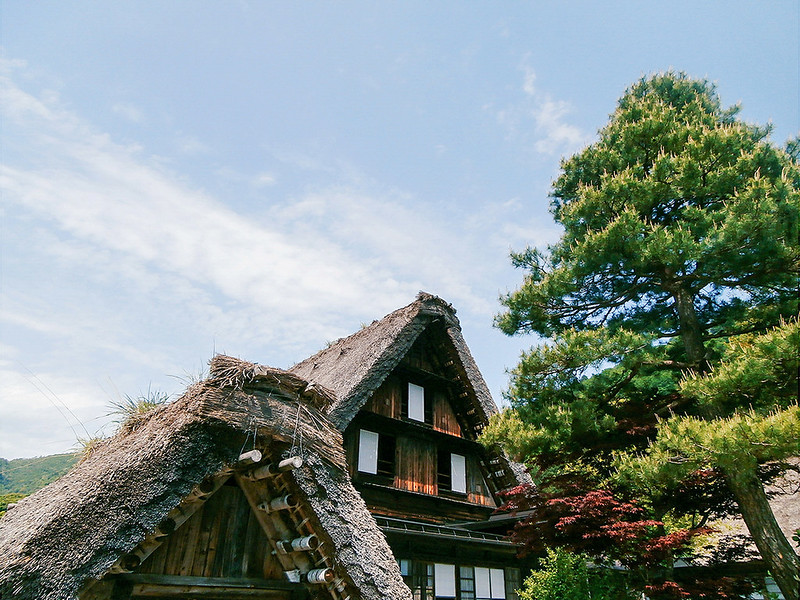 It is amazing how these seemingly fragile houses can stand the test of time. Instead of nails, the houses are strengthened and tied by yui, the tradition where the villagers support each other and come together to rethatch the gassho-zukuri roofs (They have a lifespan of 30 years). From centuries ago until today, Shirakawa-go villagers have been keeping yui in their hearts and sticking with each other through harsh winters and happy times. 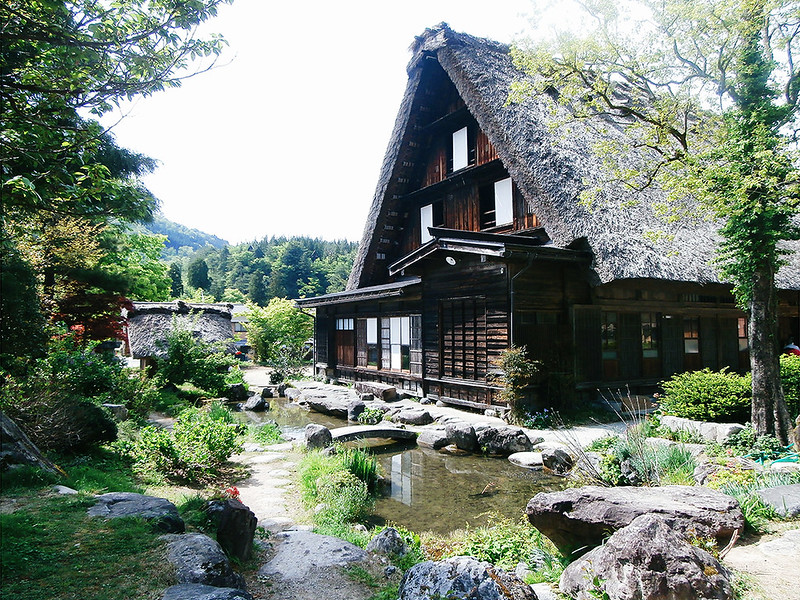 If you want to see more examples of gassho-zukuri interior, Kanda House is another popular destination. 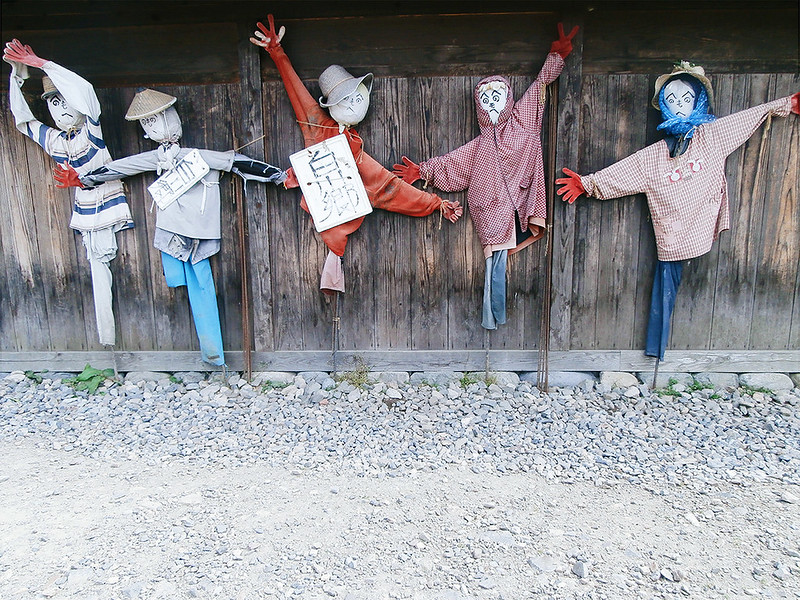 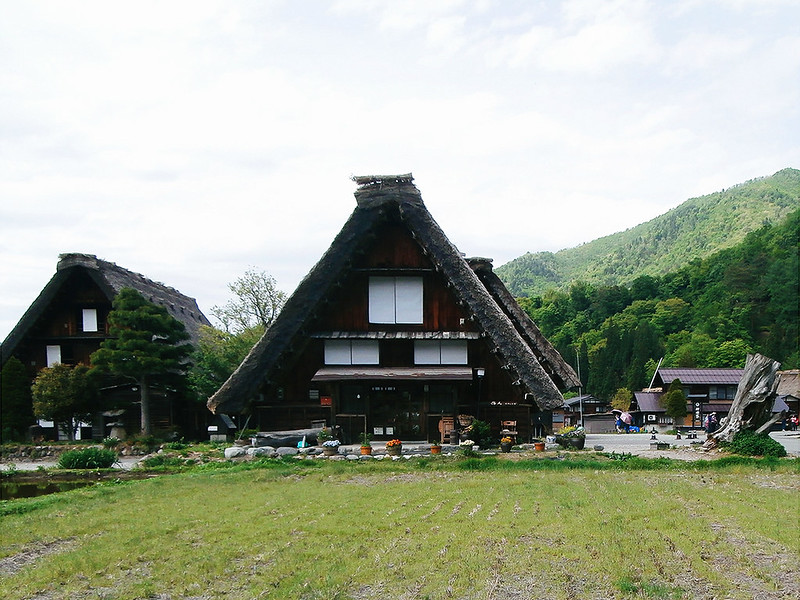 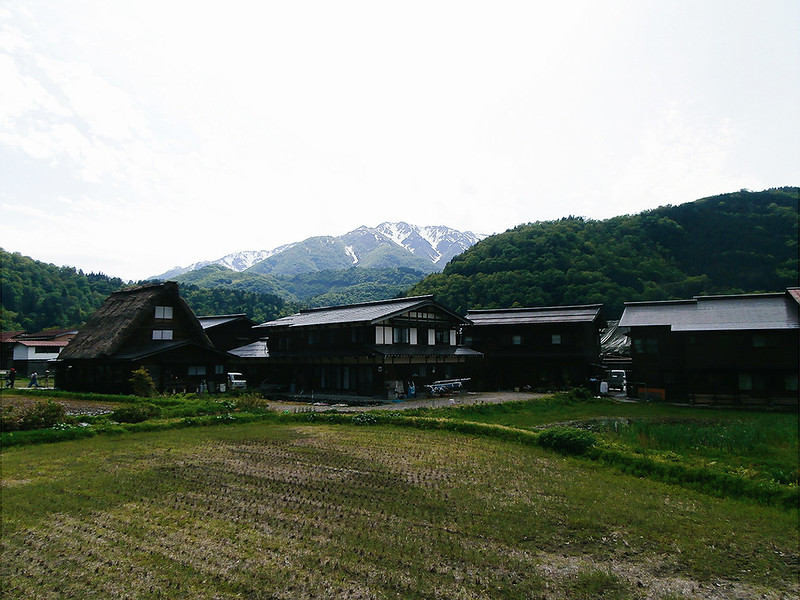 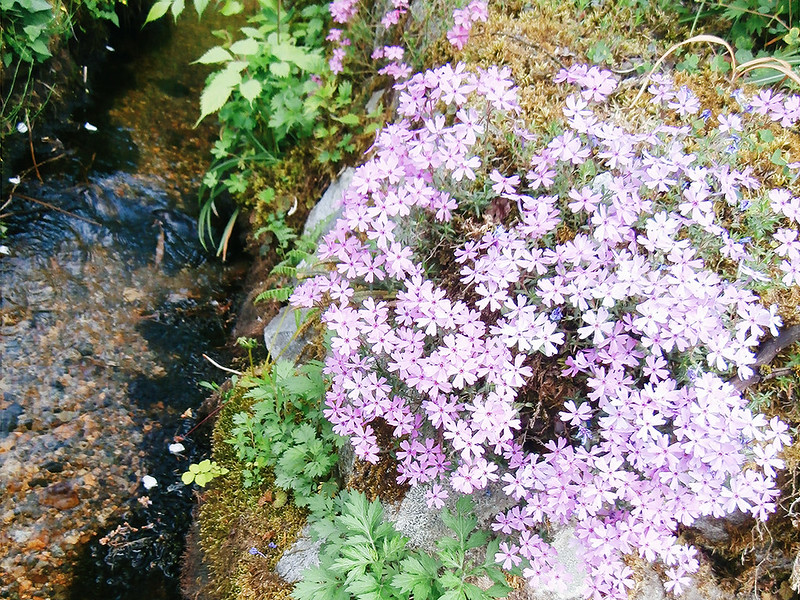 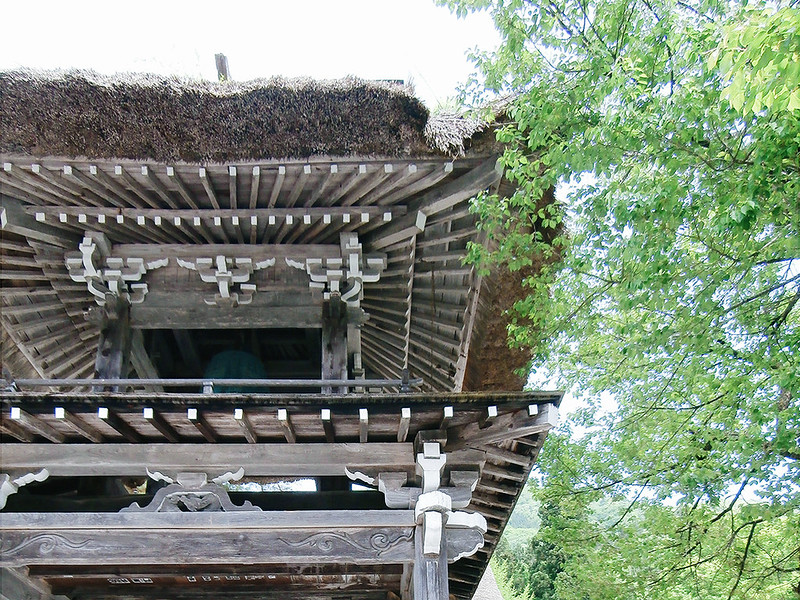 Don’t forget to check out Myozenji Temple, which is located near Deaibashi Bridge. The roof of this temple is thatched, blending in with the surroundings. 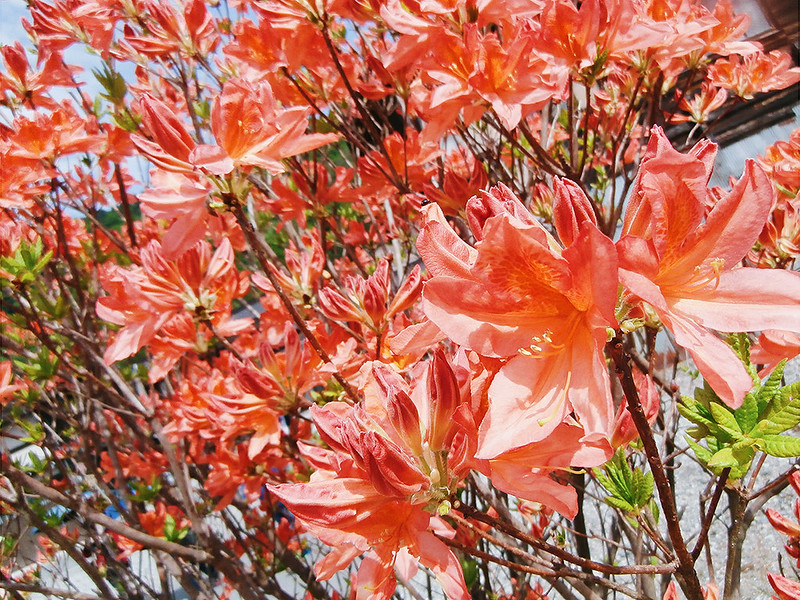 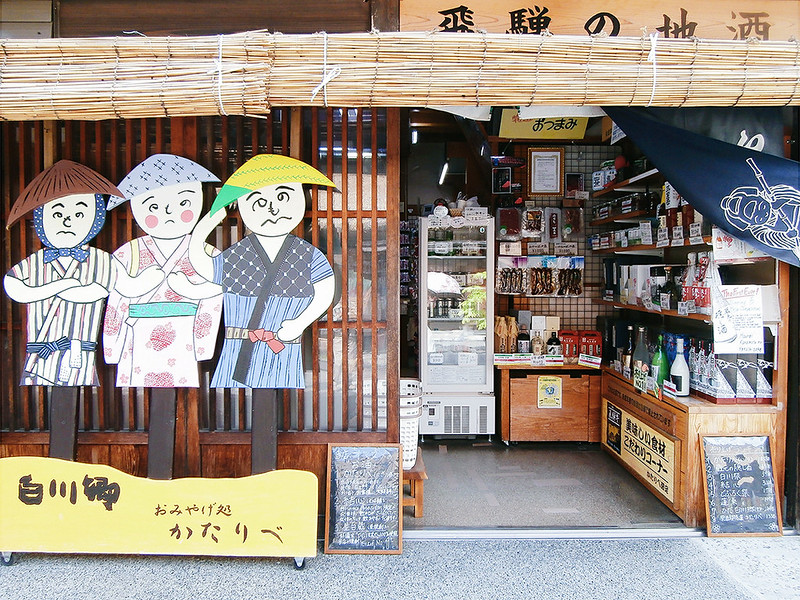 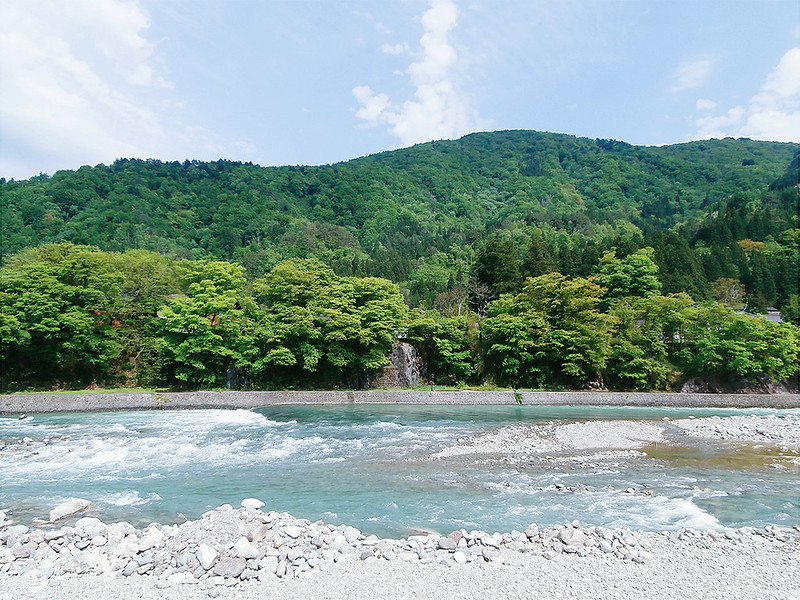 Before the bus back to Takayama arrived, I spent some time near the Shogawa River. The sun was beating down on me and that wasn’t very comfortable, but I did enjoy the fresh air and the cold, brilliant blue water. 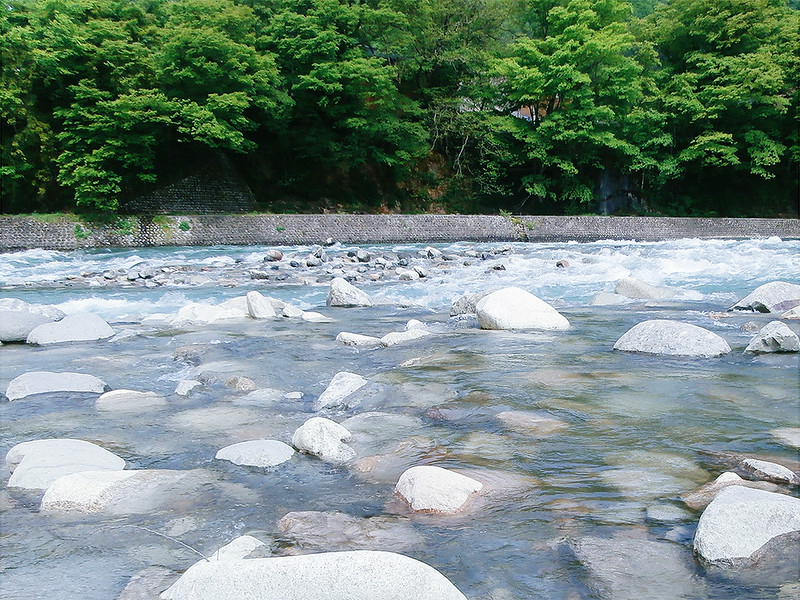 History and heritage aside, another reason that inspired me to visit Shirakawa-go Ogimachi Village is that Blackthorn City (Fusube City in Japanese) in the Pokémon video game series is likely based on it. Both Shirakawa-go and Blackthorn City are surrounded by mountains and in Pokémon HeartGold and SoulSilver, the houses are obviously thatched roof. I also read somewhere that the wooden bridge across the river at the lower part of Blackthorn City might hearken back to Deaibashi Suspension Bridge.

Shirakawa-go Ogimachi Village is getting more popular and not so hidden anymore. Commercialization has been creeping in, but it hasn’t been overcommercialized in my opinion… or maybe I visited on a good day. Still, the UNESCO World Heritage Site felt pleasantly authentic, compared to many other popular tourist attractions. Maybe it is the villagers’ yui that helps. Here is to hoping that their yui keeps protecting the Shirakawa-go from overcommercialization.

How to get there: To get to Shirakawa-go Ogimachi Village, you can base yourself in Nagoya, Takayama, or Kanazawa. From Takayama or Kanazawa, you only have to catch Nohi Bus nearby JR Takayama Station or JR Kanazawa Station. But if you start from Nagoya (I did), catch the Limited Express Wide View Hida train to Takayama first.

Nohi Bus will drop you off at the parking lot near Deaibashi Bridge, which is the entrance to the village. Just keep walking till you reach Wada House.

Shiroyama Viewpoint
When to visit: Always accessible.
How to get there: You can walk or take a shuttle bus from Wada House.

Feel free to check out my other Pokemon location hunting trips as well as my other fangirl’s pilgrimages.

I had the opportunity of a lifetime to study in Nagoya, Japan, from 2019-2022 and I really love traveling in Japan, so this blog features mostly Japan travel content with some personal reminiscences of my time there. I am now back to working full time in Bangkok, so I only go on a journey occasionally and write slowly, but my love for traveling will last indefinitely and you can also expect occasional travel content about Thailand and other countries.

I believe our “space” exploration is full of “stories” that are waiting to be told. This blog marks my beginning as a travel storyteller. I focus on honesty and details and add a lot of personal opinions and photos (both digital and film) to my posts, so if these are your things, I hope you enjoy my tales about places and people and that they can inspire you to explore space and discover your own stories.