18 years ago, my friends, classmates, and I learned in our computer class that Hotmail was the most reliable email provider, so we signed up for our first Hotmail address. As middle school kids without a care about keeping a professional image back then, many of us didn’t use our real name as our email address. Instead, we came up with (what we thought would be) cool, cute, or even funny names. At that time, I thought it would be cool to make my Hotmail address related to what I am a fan of and also video game- or anime-esque, so my email started with “ice”. What a random story it is, but ice was and is still my most favorite element to this day.

When it comes to all things icy, snowflakes are among what I love the most. Although I am from a country without snowflakes at all, I am fascinated with how they are formed and how uniquely beautiful each one turns out. Snowflakes don’t last long, but thanks to artists and scientists who treasure their ephemeral beauty and environmental impacts, these little yet precious things can be preserved in different forms, namely in photos, illustrations, or even as a whole museum called Snow Crystal Museum in Asahikawa, Hokkaido.

As a city close to the great snowy mountains of Daisetsuzan National Park in the coldest and northernmost region of Japan, Asahikawa and its people have a special bond with snow. Snowflakes in the area are considered the most beautiful in Japan, the art of the nature. Several glaciologists study the snow that falls in the Daisetsuzan mountain range extensively and the snowflakes have also inspired many works of art. Although small in size, Snow Crystal Museum was where we could learn about and see quite a lot about snow and snowflakes. 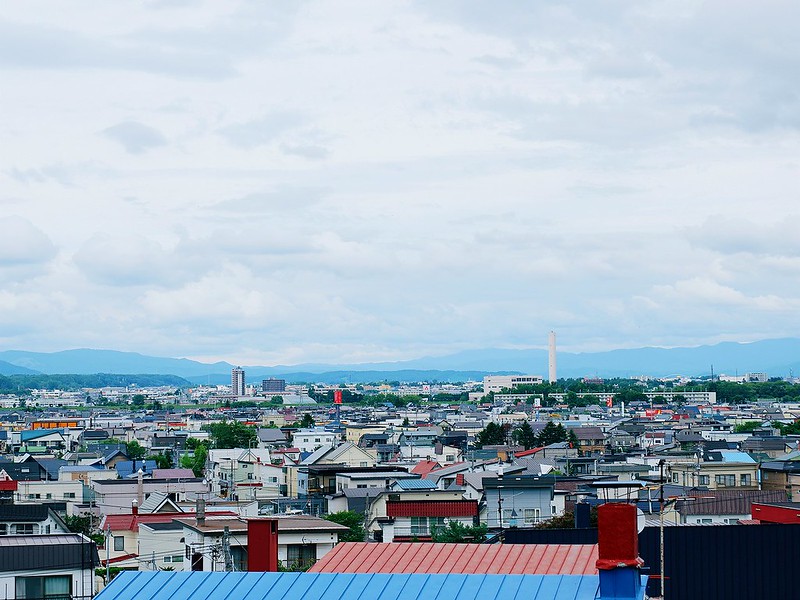 Snow Crystal Museum was situated uphill. After I got off the bus near the museum, I could enjoy a vista of Asahikawa. 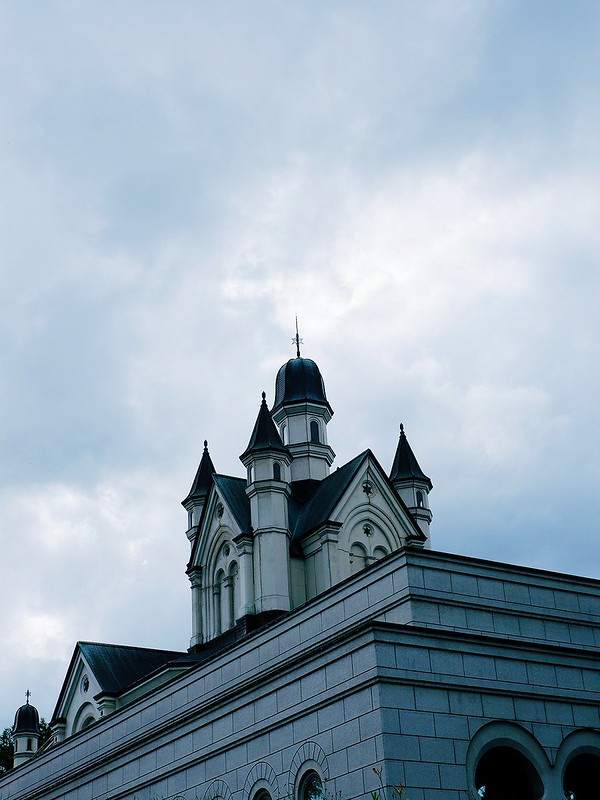 The building of Snow Crystal Museum was also dubbed Ice Palace. Though not created out of ice, the museum was mostly white (it would have looked like an ice palace more under the clear blue sky or when covered in snow in winter; I also got reminded of Ice Sanctuary in the Digimon World video game) and built in the Byzantine style. Look closely and you can see the snowflake motif already on the museum exterior.

After paying the admission (quite pricey at 700 yen, but I could pay 500 yen as a student at the time and there was some English information inside the museum, thankfully), I started exploring the elegant interior of Snow Crystal Museum, where snowflakes remained the recurring element in the decorations. 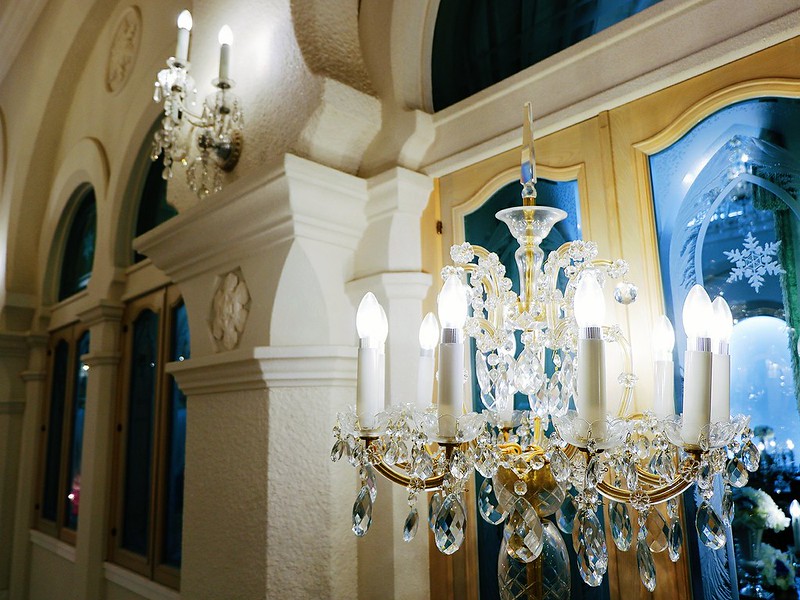 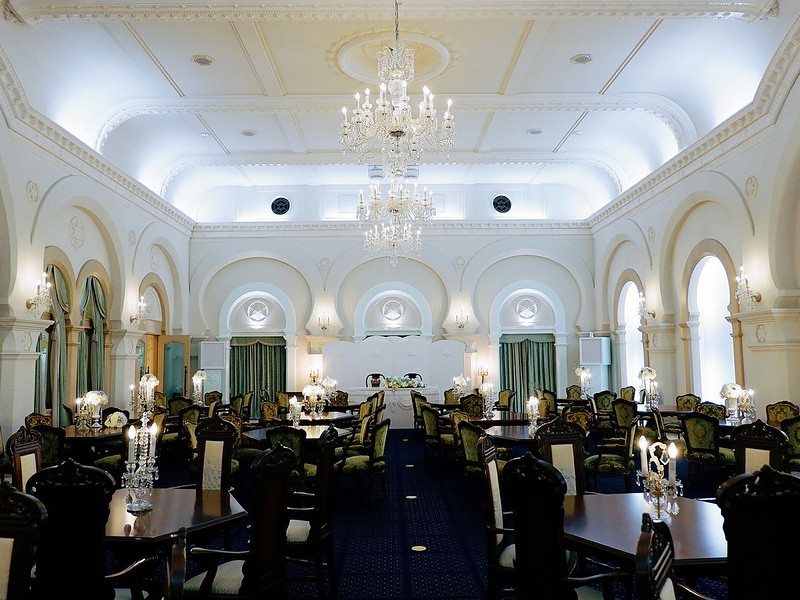 The museum was also a venue for weddings, concerts, and exhibitions. After the Disney movies Frozen achieved worldwide fame, Snow Crystal Museum even prepared special packages for those who wanted to try princess experience and photoshoots at the fairytale-like museum. 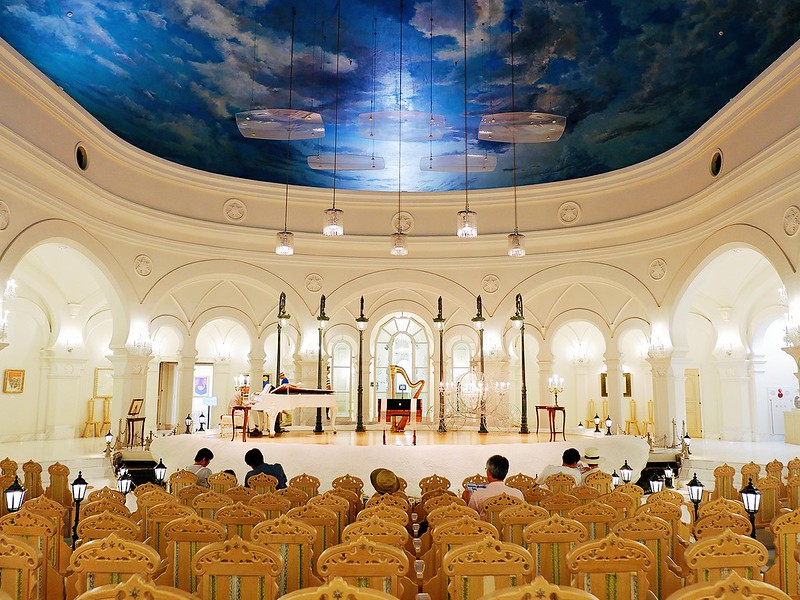 Though Snow Crystal Museum seems European at first glance, it didn’t try to be completely European. The museum didn’t just present anything about snowflakes either. They also treasured the local nature, art, and craft of Asahikawa and Japan and tried to incorporate them into the exhibits and decorations inside the museum. The Northern Sky oil painting on the ceiling and the clear water surrounding the stage in the Music Hall set the atmosphere of Hokkaido after the snow falls and melts. Other parts of the Music Hall were filled with snowflake-themed decorations too like the wall and the wooden chairs locally crafted in Asahikawa. There was a pianist playing the white Austrian grand piano when I visited. 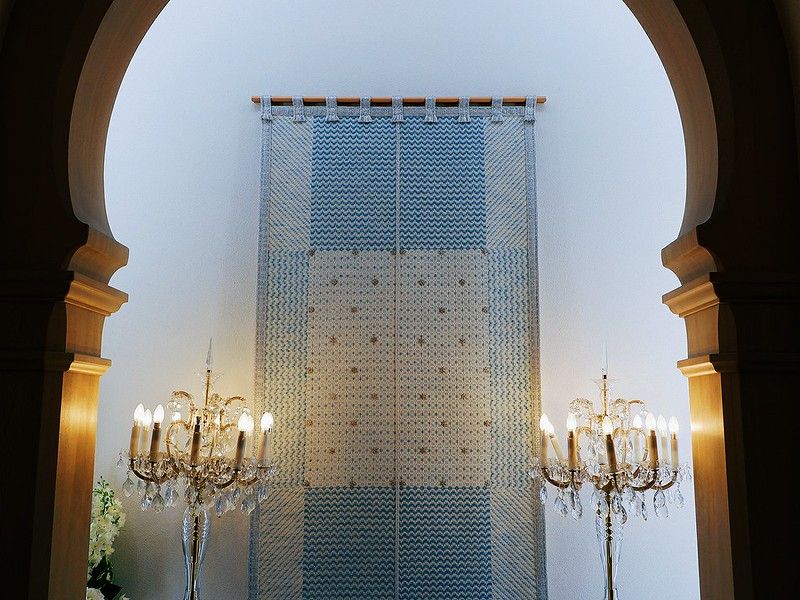 After relaxing with the piano music for a while, I checked out the other rooms and tried spotting more snowflakes, like the ones on this tapestry. The tapestry was woven using Yukaraori, the traditional textile from Asahikawa. 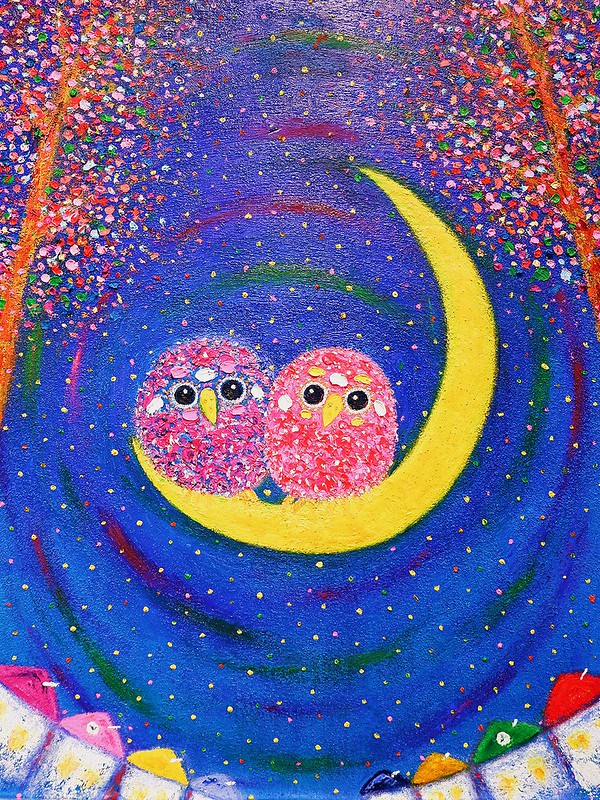 My visit also coincided with Shimizu Shinya Oil Painting Exhibition. I barely know about the Japanese art scene, especially the contemporary, but I felt lucky that I could see some of Shimizu Shinya‘s beautiful oil paintings at no additional cost from Snow Crystal Museum admission. According to the information in the exhibition room, the painter has won many awards in Europe and he also holds solo exhibitions in Japan. His works are very colorful and remind us that although we can’t live by dreams alone, the pure dreams and hopes that we may have abandoned or hidden in our hearts since young are still there and we can find them again. 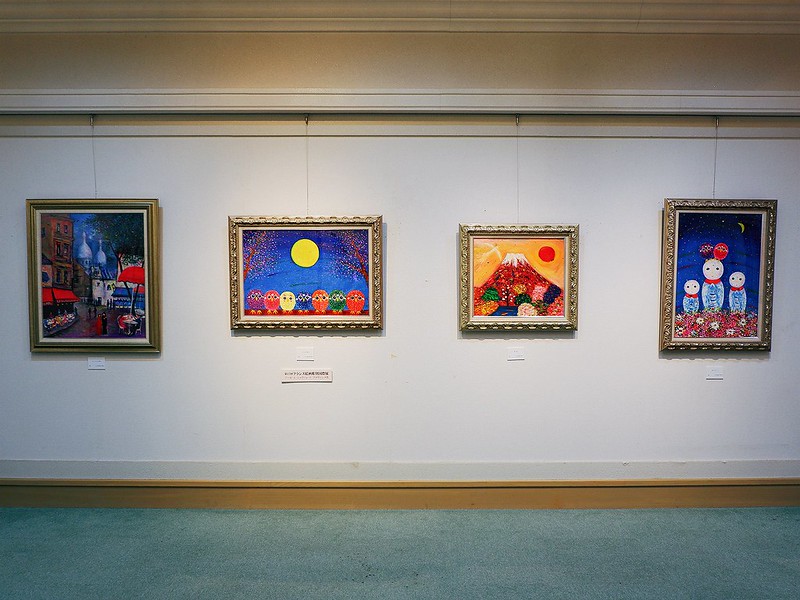 The world can be bittersweet or downright cruel in many circumstances, but I am thankful for these works of art that felt hopeful and brought a smile to my face. 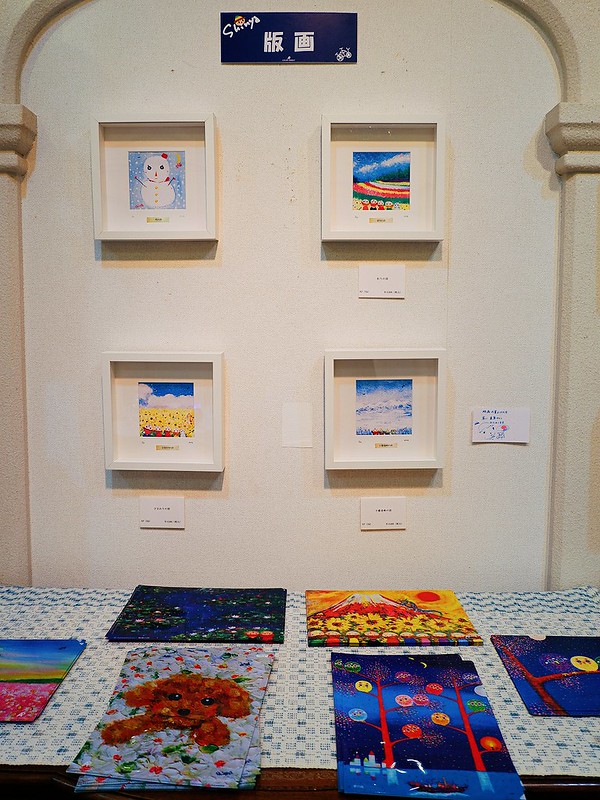 I also enjoyed the painter’s Hokkaido-themed oil paintings. Not only Daisetsuzan National Park that I just visited in the morning, one of the paintings included the rainbow flower fields of Farm Tomita that I went to a few days before. 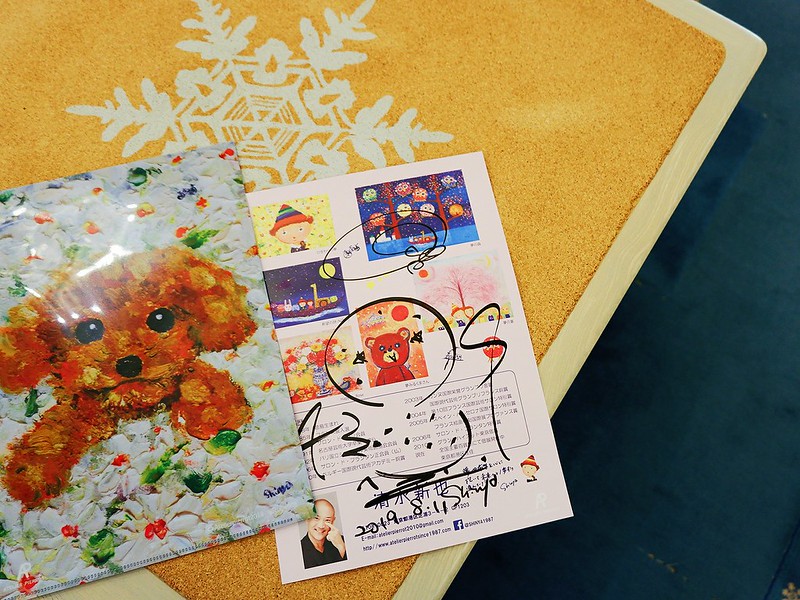 I bought this folder for 500 yen, which was really worth it. Shimizu Shinya was at the exhibition himself and I got his autograph too. 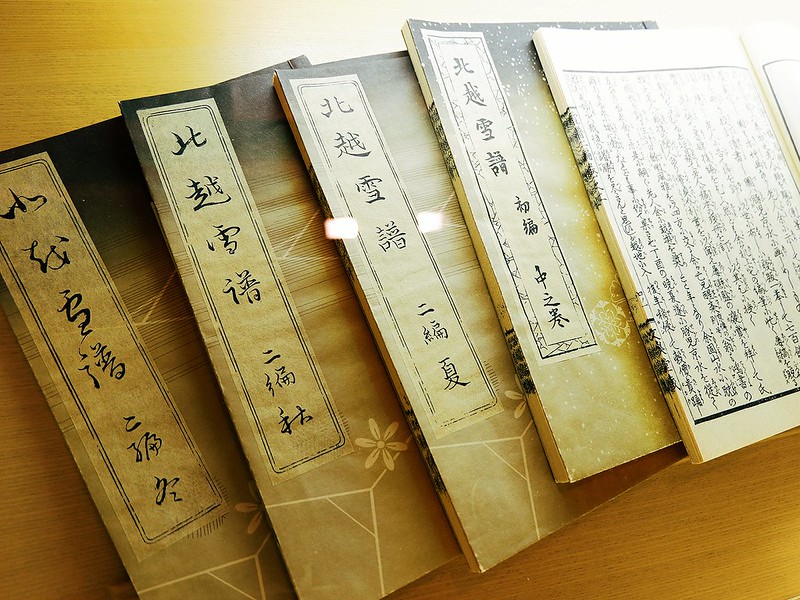 More snow-related scientific knowledge, artistic works, and historic memorabilia awaited in the next rooms, from books to videos and photos of Hokkaido snowscape. I learned that Professor Ukichiro Nakaya from Hokkaido University made a significant contribution to glaciology and low temperature science through his extensive research of snowflake shapes and classification and creating the world’s first artificial snow crystal in Hokkaido in 1936. 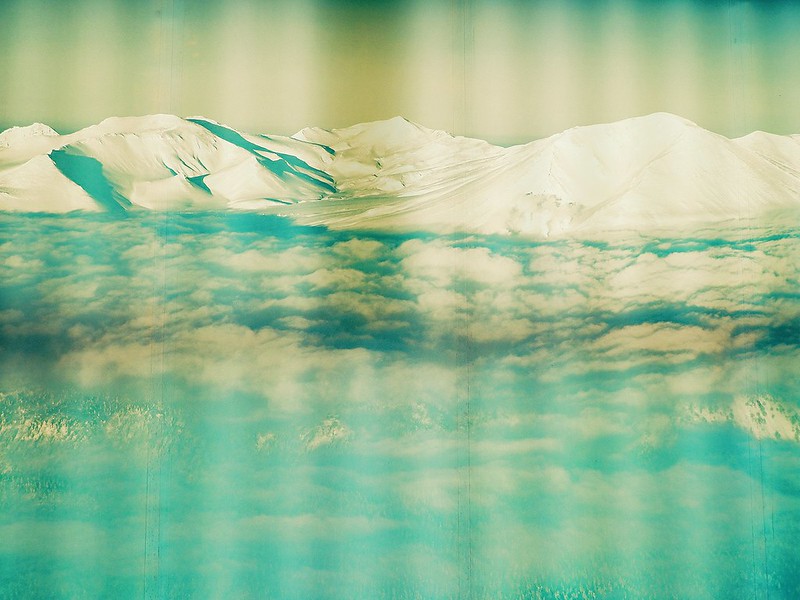 The Daisetsuzan mountain range at its snow-capped peak. 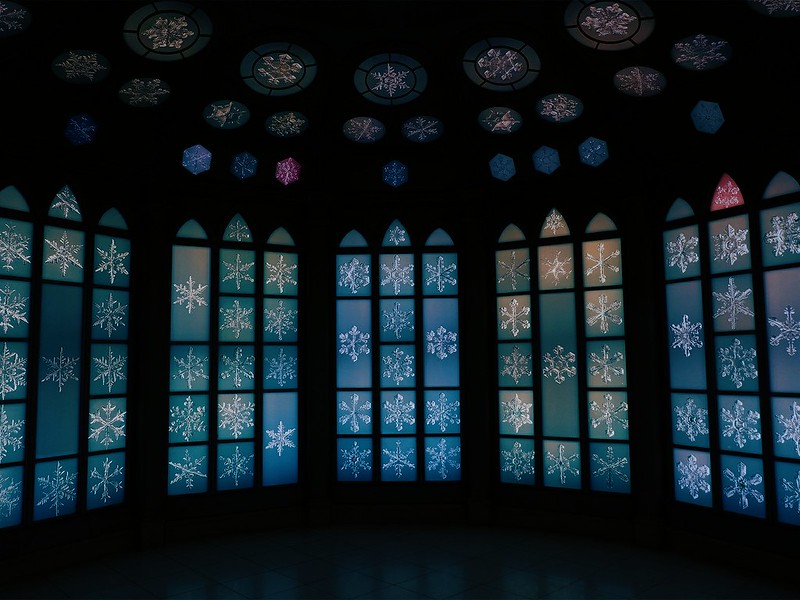 The Snow Crystal Room was one of the highlights of the museum and felt sacred and fantasy-like. Over 200 microphotographs of snow crystals from the Daisetsuzan mountains filled the wall and the ceiling. Each one came from the meticulous work of scientists. 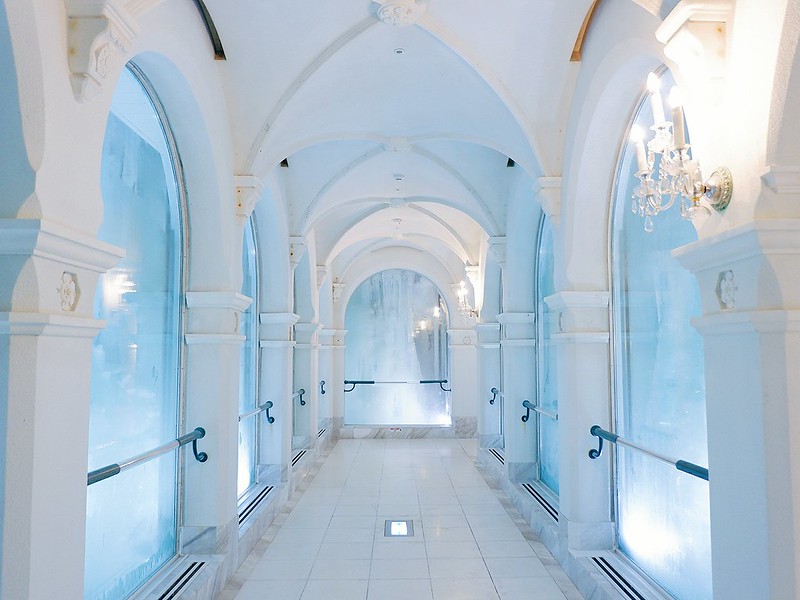 Though I visited the museum in summer, I got to experience the chill briefly in the Ice Corridor. 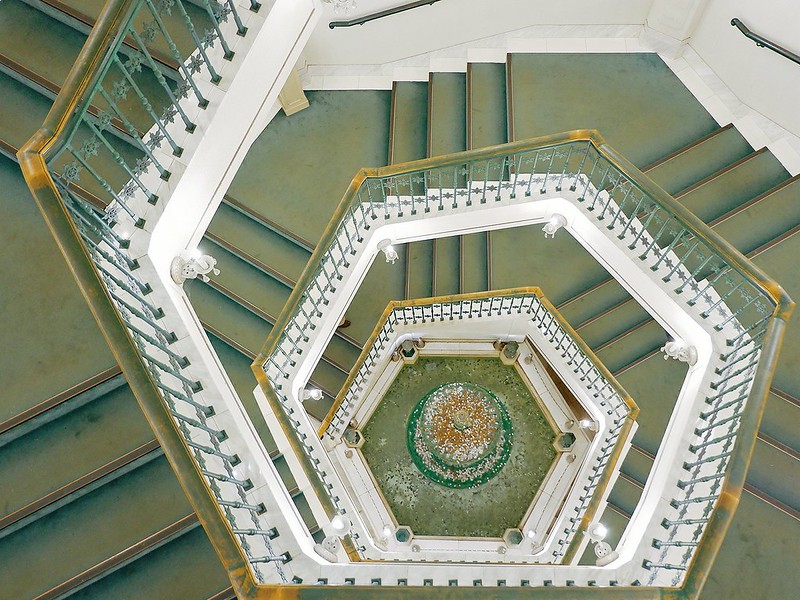 Another very photogenic spot at Snow Crystal Museum was this snowflake-inspired hexagonal spiral staircase. Look at the handrails that stayed on the theme of snowflakes. At the bottom of the staircase was the fountain where visitors could throw in their coins to make a wish. 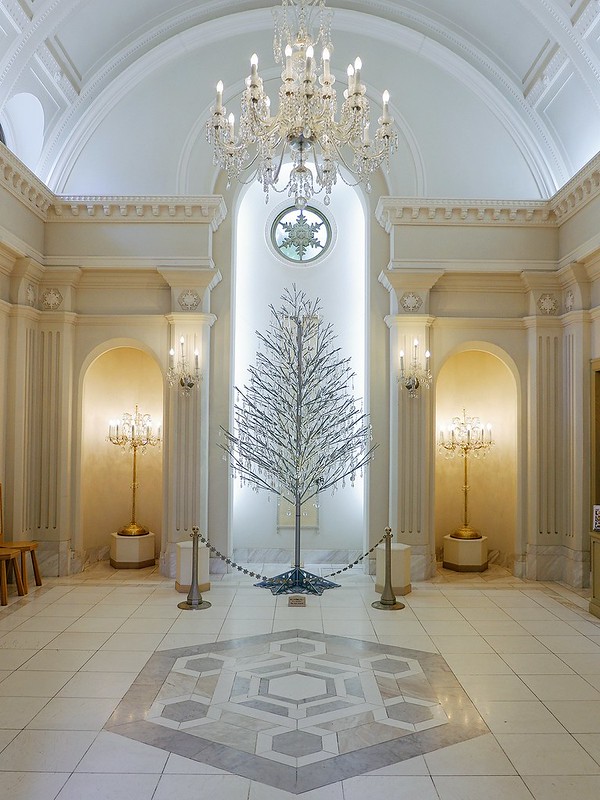 More snowflake beauty before I left Snow Crystal Museum and took the bus back into the city center of Asahikawa.

I have already talked about the Japanese bittersweet acceptance of ephemerality of everything in my posts about my last week before leaving Japan and the particularly fleeting snow in Nagoya. And here, I can’t help bringing this sentiment up again. It is very interesting that Japan has this acceptance and it seems to help them treasure various things in life even more. Japan is one of the countries with museums, from the small and locally-run to the grand private and public ones, dedicated to preservation of many specific and small things. Including the delicate beauty of snowflakes at Snow Crystal Museum. As mentioned at the beginning of this entry, although snowflakes and some other things are especially short-lived and may not be very significant for some people, I am thankful for everyone behind these museums who have come up with ways to present the value of even the obscure things. 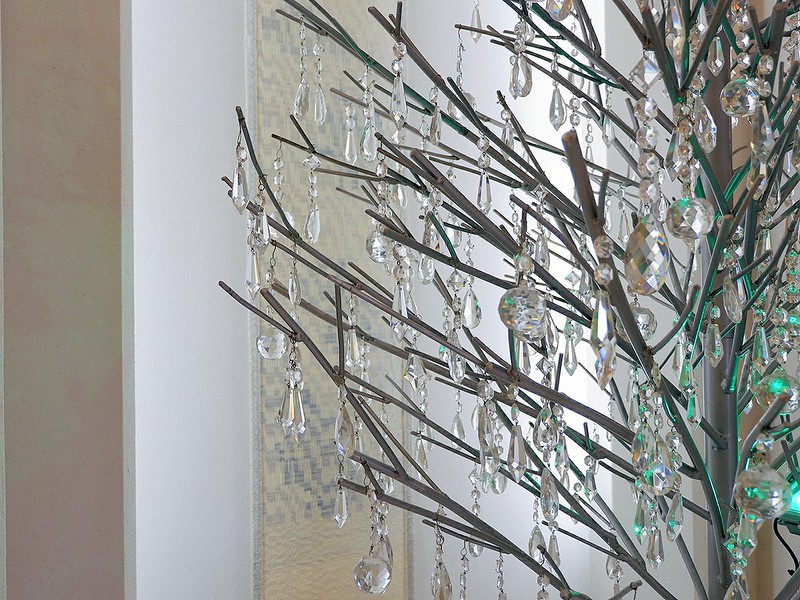 As you may have noticed in the past tense, the museum that opened in 1991 had to close down due to the impacts of COVID-19 in June 2020. I mentioned before in my Mount Asahidake guide that I only had time for the museum because it was too foggy to complete my hike. I initially planned to go to Snow Crystal Museum on my second Hokkaido trip, but the pandemic started before that. If I didn’t get to visit Snow Crystal Museum on my first Hokkaido trip in 2019, I would have missed the opportunity to see the art and learn about one of my favorite things.

It is really sad that the museum met an early end. It seems to be permanently closed and although my hope is very small, it would be nice if it can reopen or come back in another form or if the art pieces and artifacts can be exhibited elsewhere. For now, these photographs and words are how I preserve my treasured memories of the snow crystals and the museum itself.

I had the opportunity of a lifetime to study in Nagoya, Japan, from 2019-2022 and I really love traveling in Japan, so this blog features mostly Japan travel content with some personal reminiscences of my time there. I am now back to working full time in Bangkok, so I only go on a journey occasionally and write slowly, but my love for traveling will last indefinitely and you can also expect occasional travel content about Thailand and other countries.

I believe our “space” exploration is full of “stories” that are waiting to be told. This blog marks my beginning as a travel storyteller. I focus on honesty and details and add a lot of personal opinions and photos (both digital and film) to my posts, so if these are your things, I hope you enjoy my tales about places and people and that they can inspire you to explore space and discover your own stories.