We often compare climbing hills to overcoming obstacles, but some people get over certain challenges by creating hills. Those people are the world-famous Japanese architect Tadao Ando and the legendary Japanese-American sculptor and landscape architect Isamu Noguchi. And it just so happens that Tadao Ando’s and Isamu Noguchi’s artistic hills are in Sapporo, the capital city of Japan’s northernmost island of Hokkaido.

I have written about the popular attractions located in Sapporo city center before. Although Makomanai Takino Cemetery and Moerenuma Park, where Tadao Ando’s and Isamu Noguchi’s hills are situated, take some time to get to from Sapporo city center, the cemetery and the park are free to enter and they are also unique, so I highly recommend people with multiple days in Sapporo to visit them. 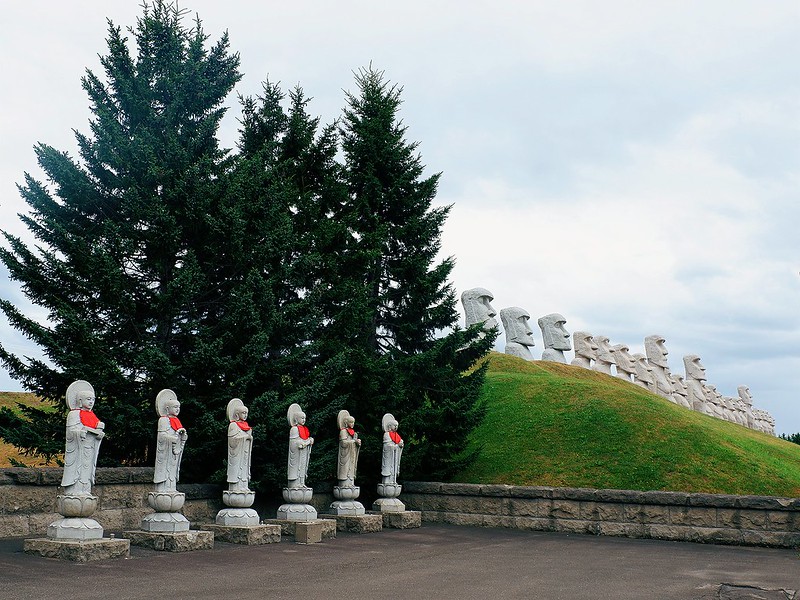 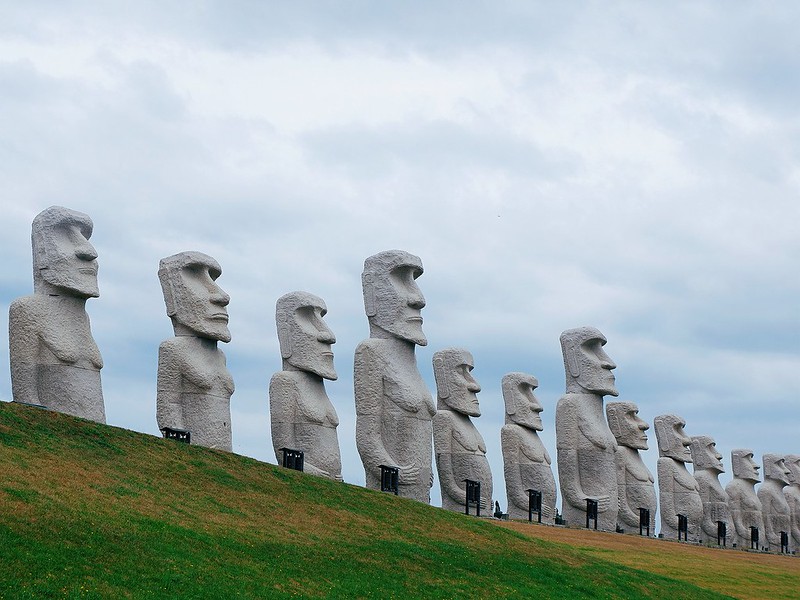 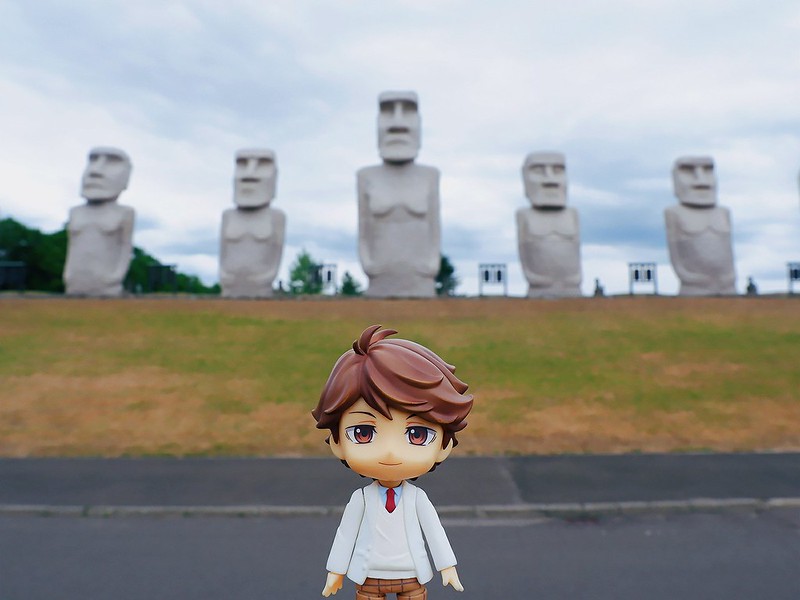 I haven’t got to Tadao Ando-designed hill yet, but the small Moai-lined hill is already impressive for me. 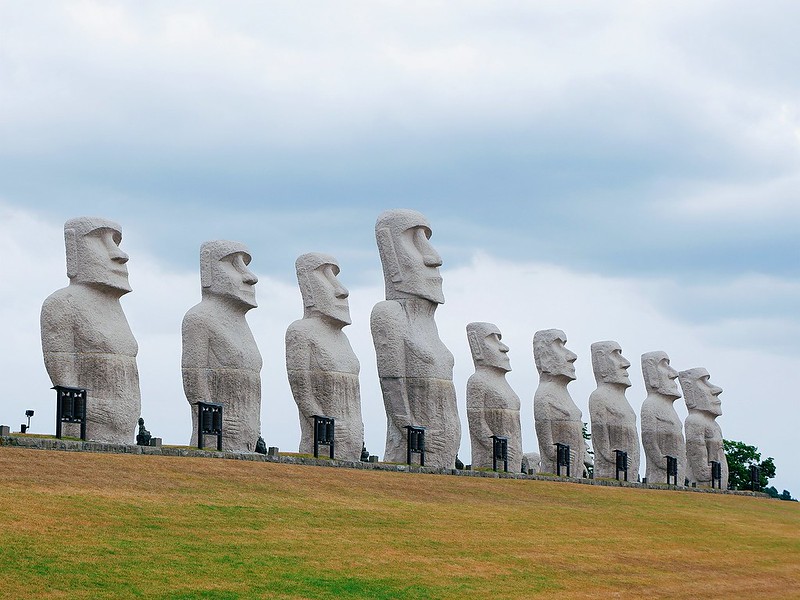 The contrast between Japanese art and these replicas of foreign art seems so random at first, but things might make more sense if we consider the symbolic meaning of Moai. Apart from honoring the spirits of ancestors, Moai means living into the future. They fit the cemetery as resting place for the dead and these reproduced Moai statues in may remind us of our legacies that last into the future, even when we no longer live in this world.

The Moai statues of Makomanai Takino Cemetery were carved from stone and still feel solemn despite being replicas. Since I have never seen the original Moai in person and don’t know if I will ever get to, I am glad I could see these well-made (in my opinion) replicas. 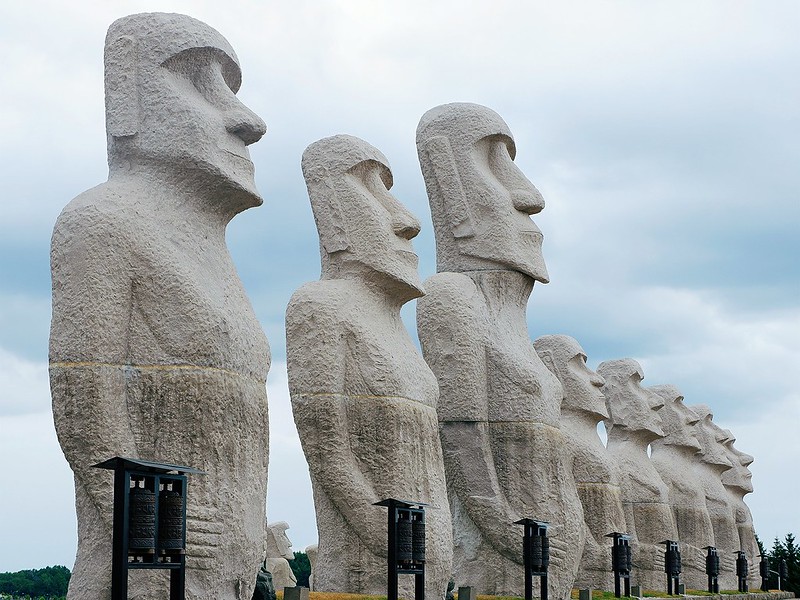 Makomanai Takino Cemetery has around 40 Moai statues in varying sizes, the biggest ones being 10.5-meter tall. We are allowed to go over the hill and get closer to these cool deadpan statues. 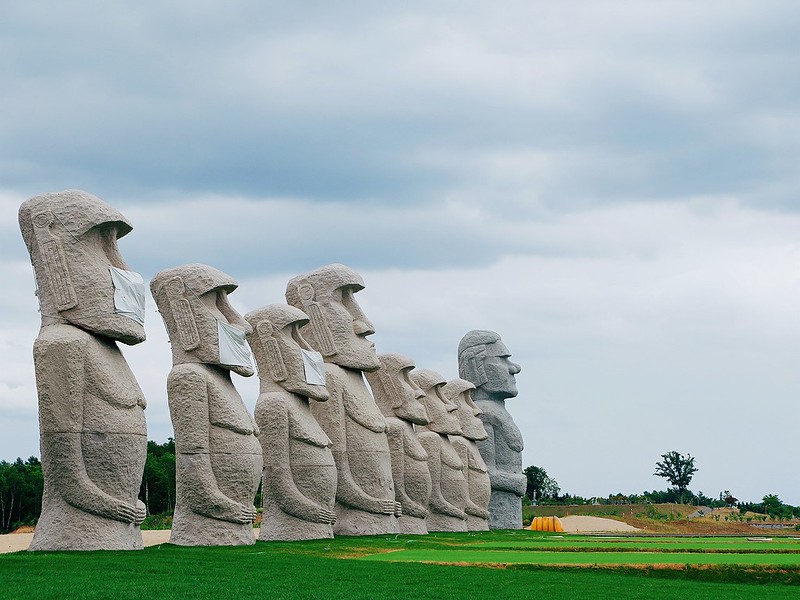 Due to COVID-19, some of the Moai statues remind us to wear masks. 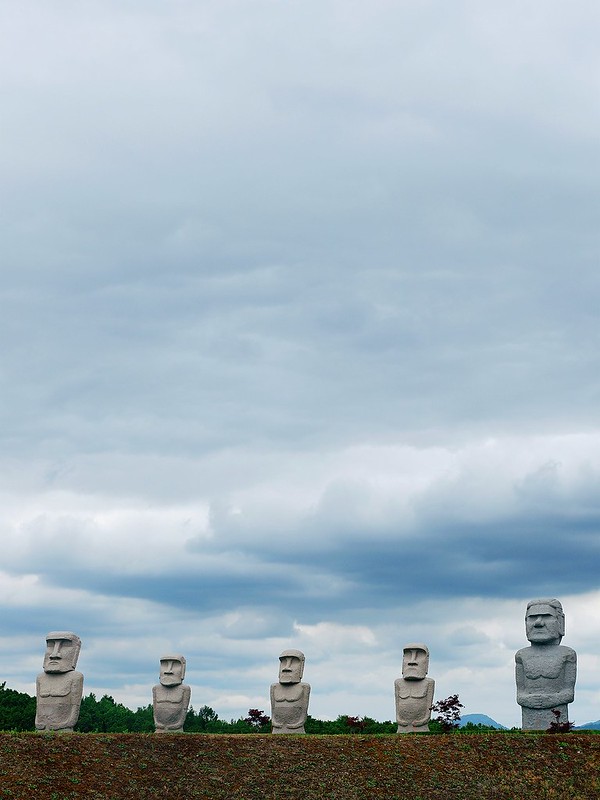 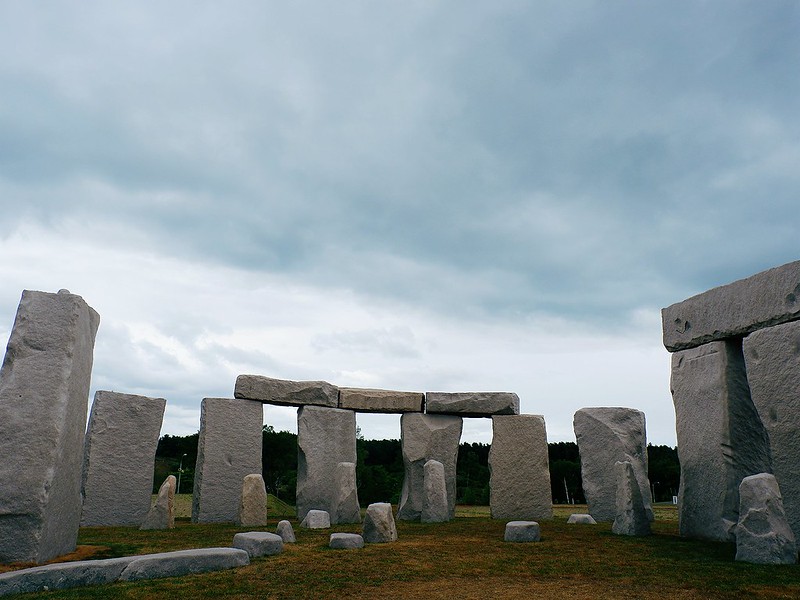 In a few minutes, we can jump from Chile to England.

The life-size replica of Stonehenge in Makomanai Takino Cemetery is linked to the theory that the site of the real Stonehenge was a burial ground. 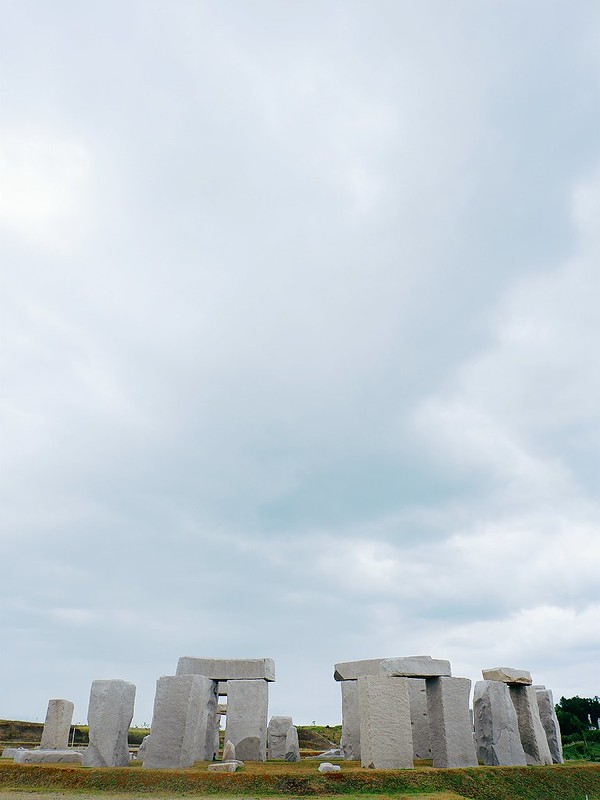 Although the Stonehenge at the cemetery seems to be less popular than the Moai replicas, I am glad I saw it too because I have never been to England either.

Actually, the 13.5-tall seated Buddha wasn’t created by Tadao Ando. It has always been there in Makomanai Takino Cemetery area, but the group of people taking care of the cemetery felt that the lone big Buddha might have induced “unrestful impression” of the cemetery instead of “serene appreciation”. To tackle this problem, they consulted with Tadao Ando on how to attract more visitors to the cemetery without dismantling the Buddha statue. That was why the Pritzker Architecture Prize-winning, self-taught architect decided to conceal the Buddha statue almost completely with a rotunda, built in his signature minimalistic style with concrete (other outstanding examples of Tadao Ando’s architectural creation included the art museums on Naoshima Island), hence the name Hill of the Buddha. 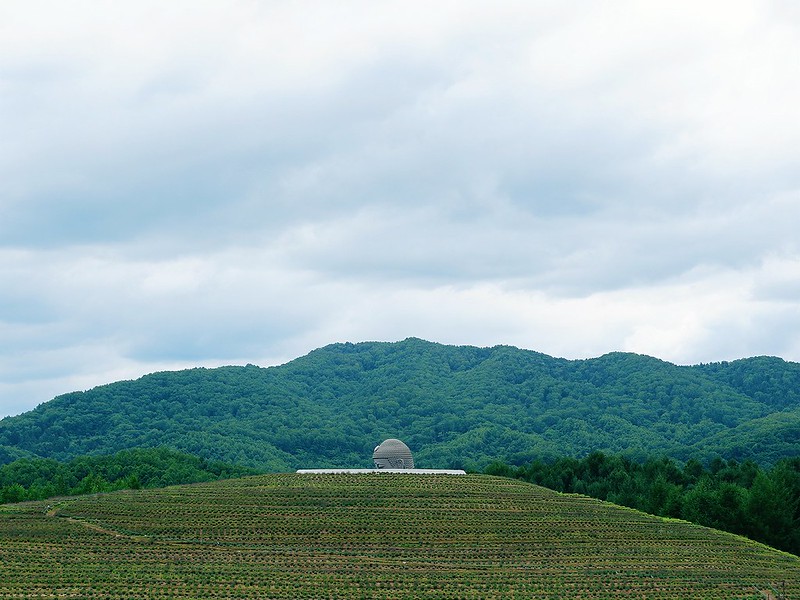 Furthermore, the concrete dome is blanketed by over 150,000 lavender plants. Only the crown of the Buddha head peeks out from the opening at the top of the dome, so the Buddha has also earned the nickname Atama Buddha (atama means head in Japanese). 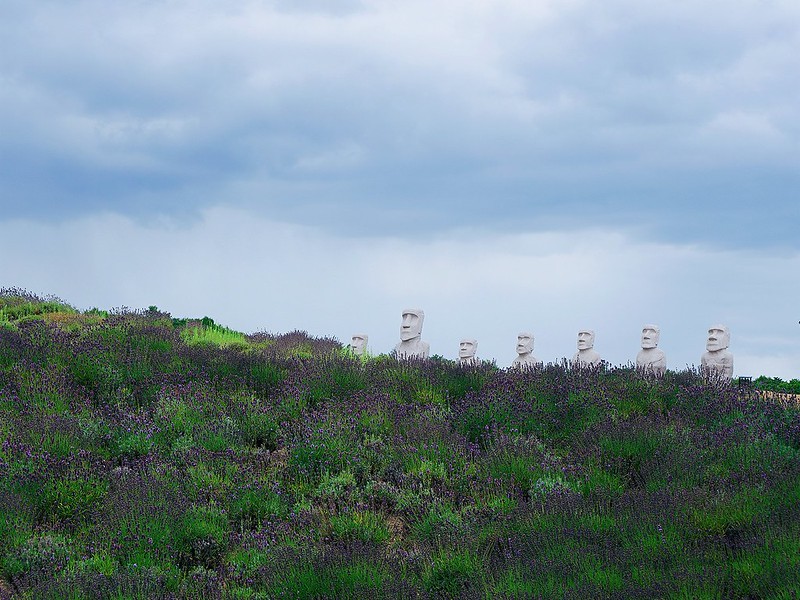 I visited Makomanai Takino Cemetery in early-August 2021, so the lavender that usually reached peak bloom in late-July had mostly withered. When Tadao Ando planned the Hill of the Buddha, he also envisioned its transformation along with the four seasons. Lush green hill in spring, lavender hill in summer, hill against the backdrop of warm colors in fall, and snow white hill in winter. It was a pity I couldn’t see the sight of Atama Buddha encircled by the purple hill. Still, there were a few lavender left to enjoy. 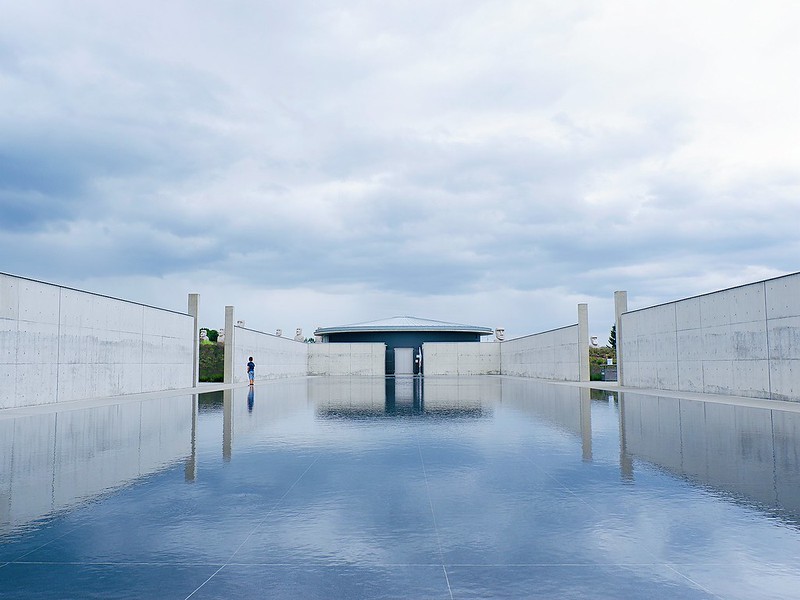 The Water Garden before entering the Hill of the Buddha, also by Tadao Ando. Inspired by the idea of purifying ourselves with water in Buddhism, the pool is for us to walk around before seeing the Buddha statue, to cleanse our minds and awaken the extraordinary. I am sure the Water Garden would have looked even better if I visited on a sunny day. 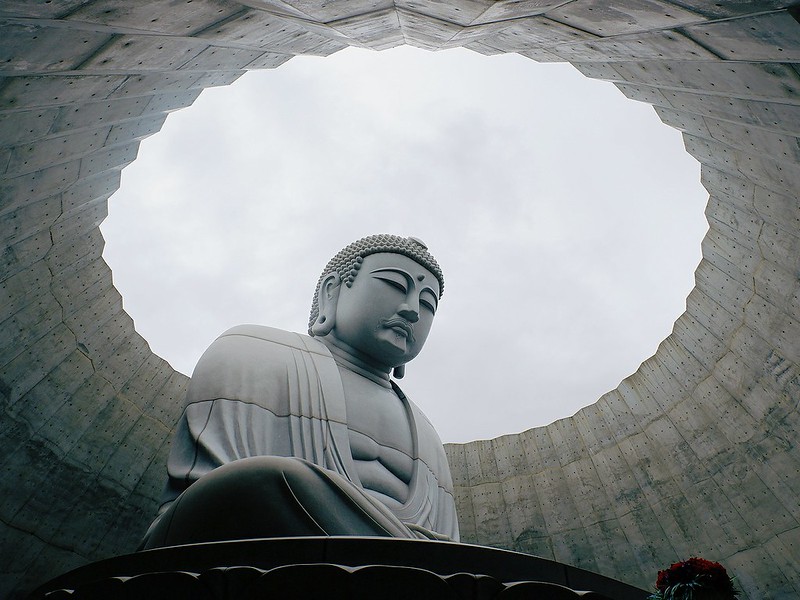 Tadao Ando’s creativity doesn’t end at incorporating the change of the seasons and the water into the Hill of the Buddha. As visitors finally reach the tunnel that leads inside the Hill of the Buddha, they will realize that the face of Atama Buddha is still covered by the rotunda. With heightened sense of anticipation, we all can see the Buddha statue gradually being revealed as we walk through the dim tunnel, before reaching the end where the sun shines down through the skylight and leads our gaze up to the face of Atama Buddha. This interplay with natural light is another key feature in Tadao Ando’s works. 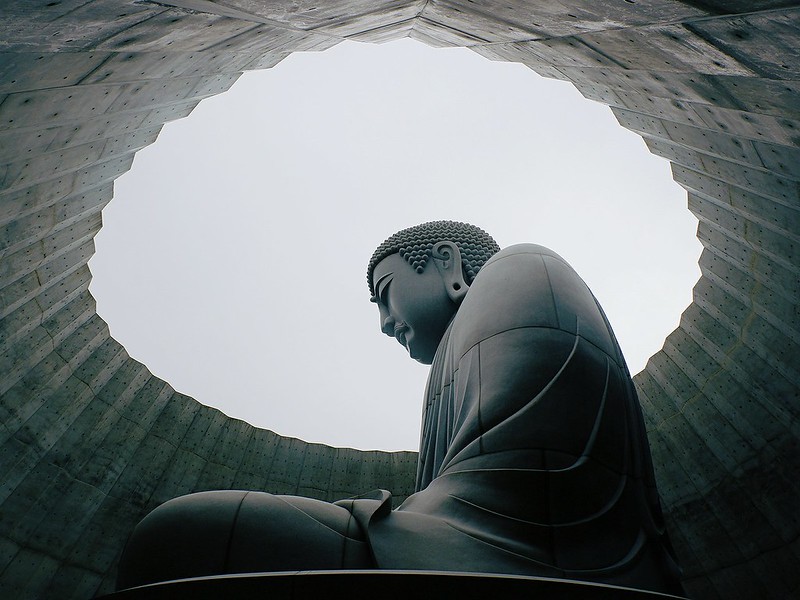 Well, I didn’t get to experience the halo-like effect around Atama Buddha due to the overcast sky and drizzle, but I still like the Hill of the Buddha. 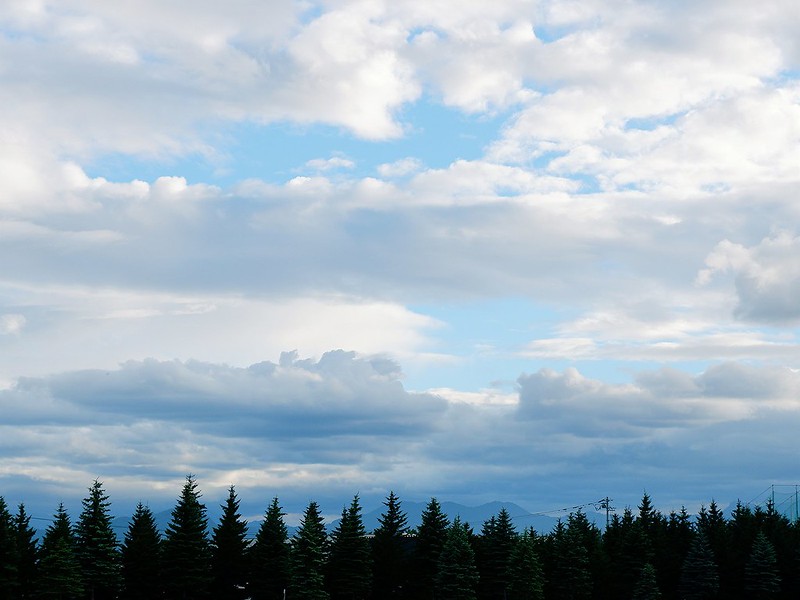 In the late afternoon, I traveled to Moerenuma Park, where Isamu Noguchi-designed hills are. Actually, the whole park is the late world-renowned architect and sculptor’s brainchild and it was also his last work. 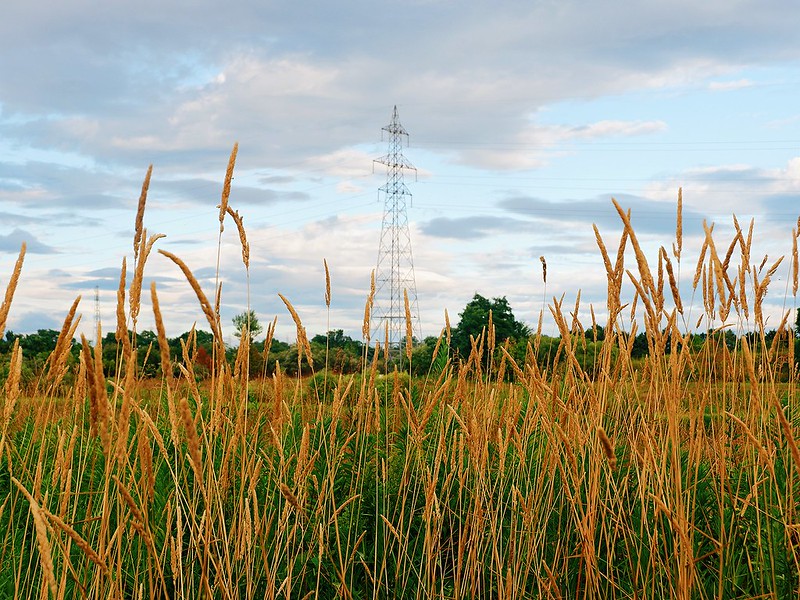 Moerenuma Park area is a marshland and before it has become the public park that we see today, the area already had potential as green space for the Sapporo Circular Greenbelt Concept. However, it became a waste treatment site for a while and was badly damaged, but through the local government’s effort and Isamu Noguchi’s ideas, they have successfully restored the land and turned it into an artistic, spacious park. 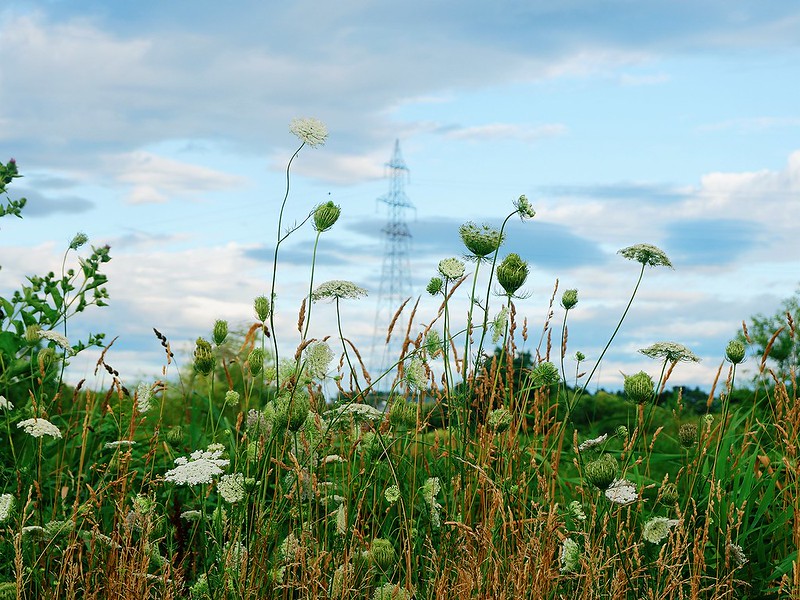 In addition to being an environmentally-friendly urban development project, Moerenuma Park was Isamu Noguchi’s dream of sculpting the earth and fusing the natural and the artificial into a single work of art. The internationally-renowned artist designed multiple hills and several other structures based on geometric shapes to be added to the park. Unfortunately, he died in the same year he completed the park design, but his team carried through. In the end, Isamu Noguchi’s dream sculpture has become a reality and Moerenuma Park is regarded as his biggest and most ambitious work. 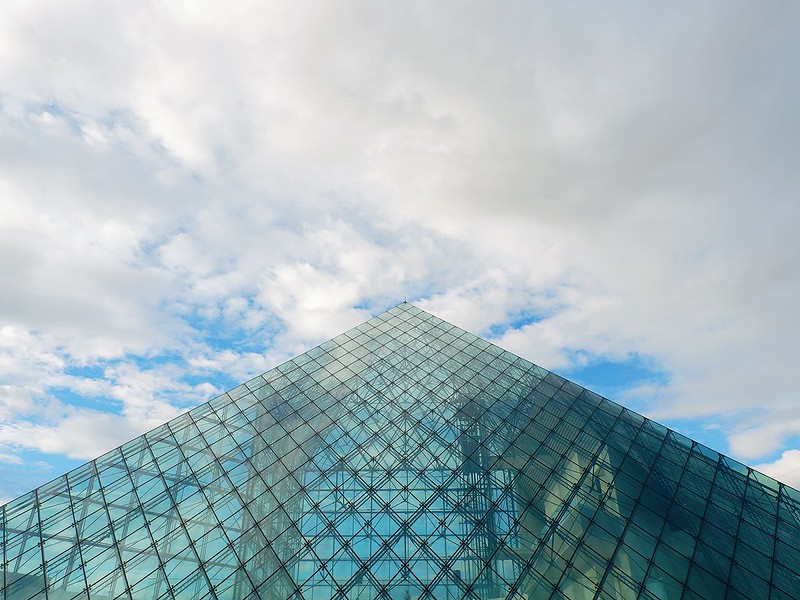 My first stop in the art park was Hidamari, meaning Sunny Spot. The glass pyramid is reminiscent of the one at Louvre because Isamu Noguchi and I.M. Pei were friends and Hidamari is a tribute to Pei’s Louvre Pyramid. I was lucky the sky was no longer gloomy when I arrived at Moerenuma Park; it was great for photographing glass structures. 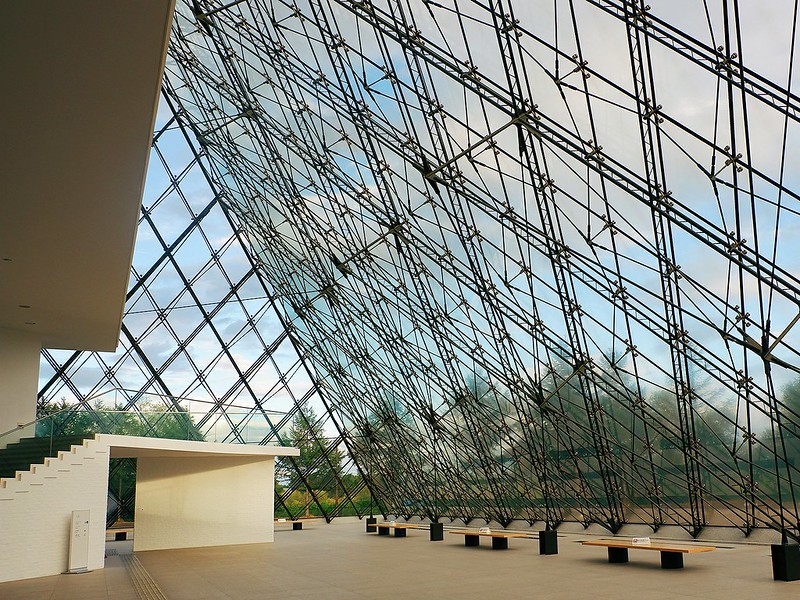 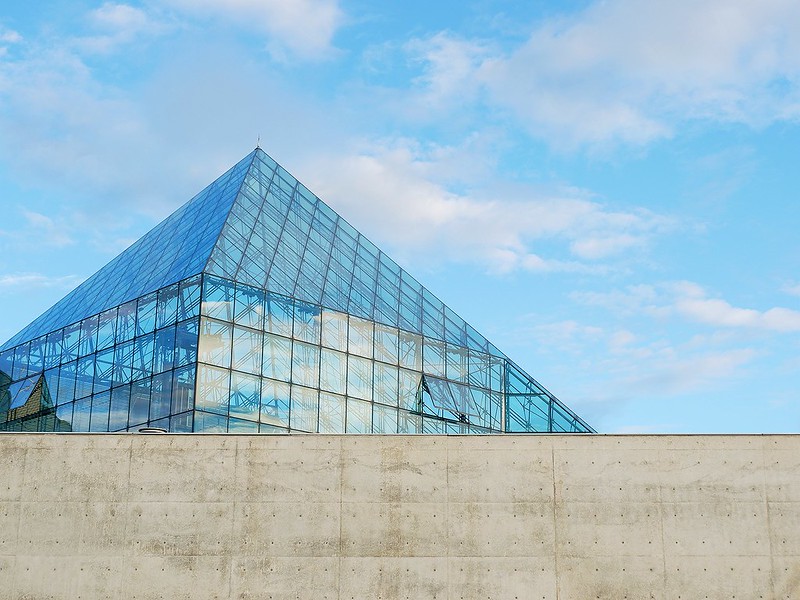 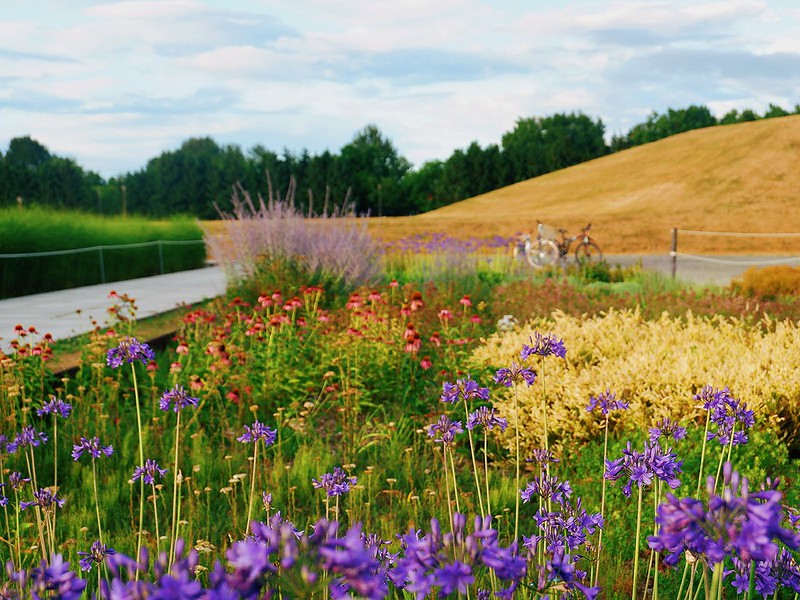 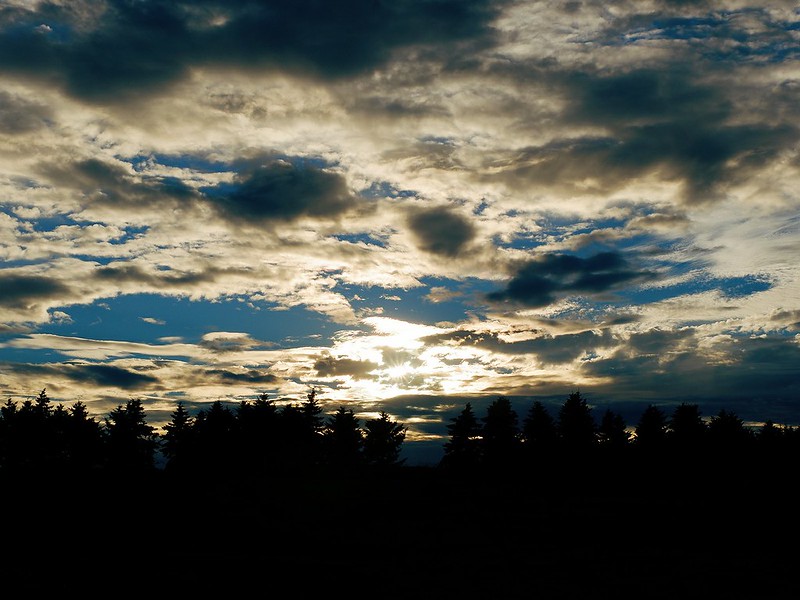 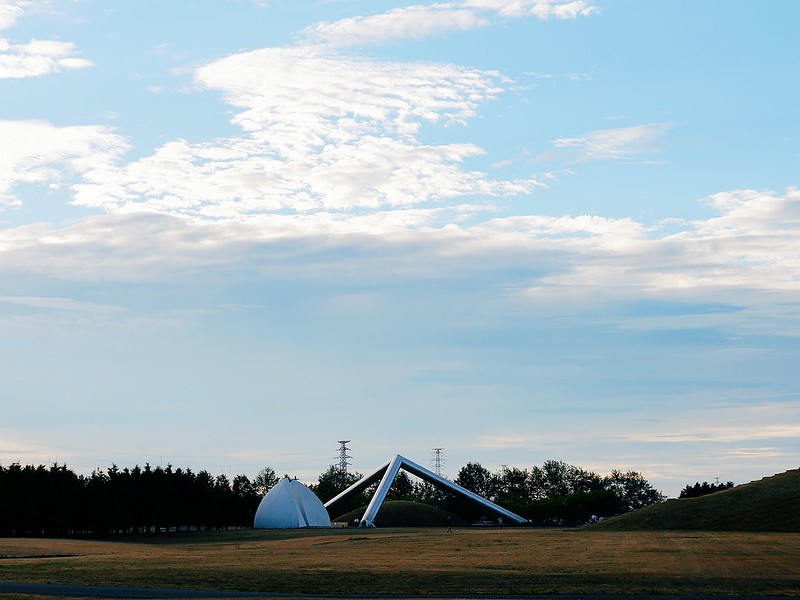 I then walked to the sculpted hills of Isamu Noguchi. Tetra Mound is an intriguing installation with a triangular steel structure above. Not far from it is Music Shell, an actual live performance space especially for musicians. 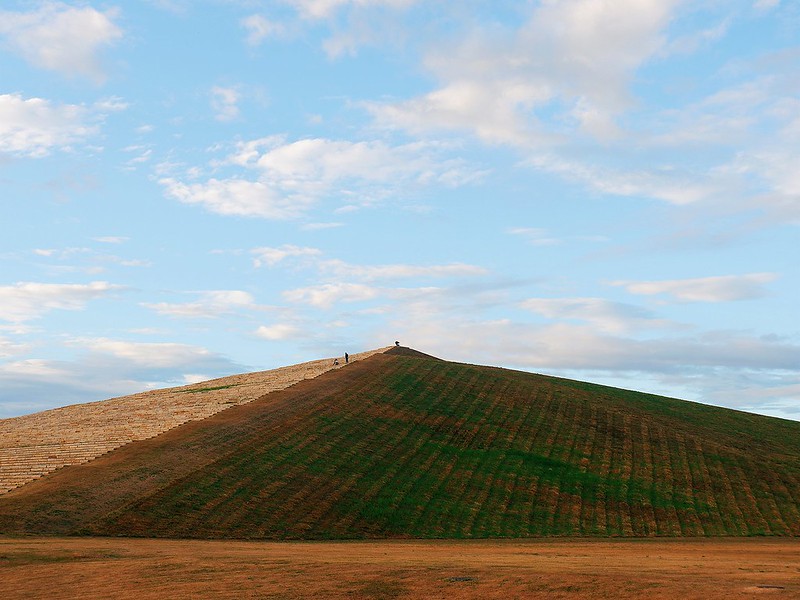 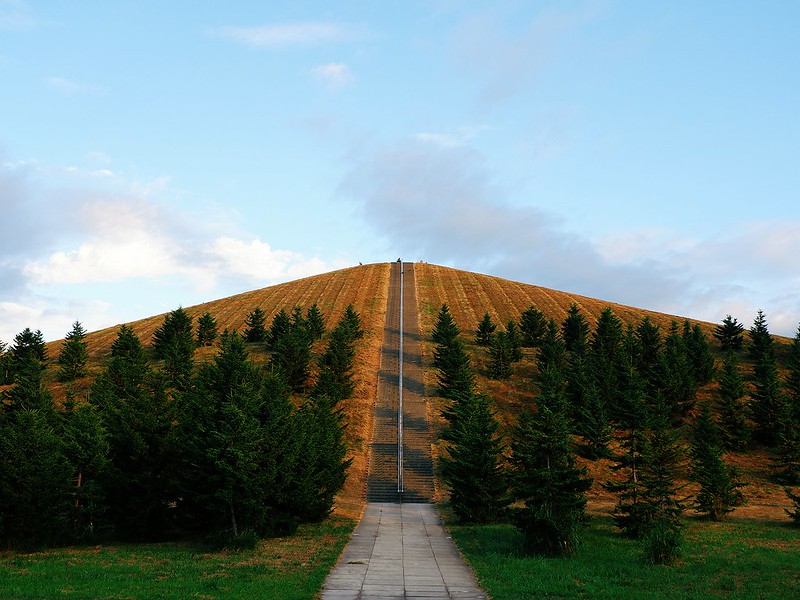 However, my most favorite work of art in Moerenuma Park is Mount Moere. This pretty tree-decorated artificial hill was crafted out of non-burnable landfill and leftover soil. 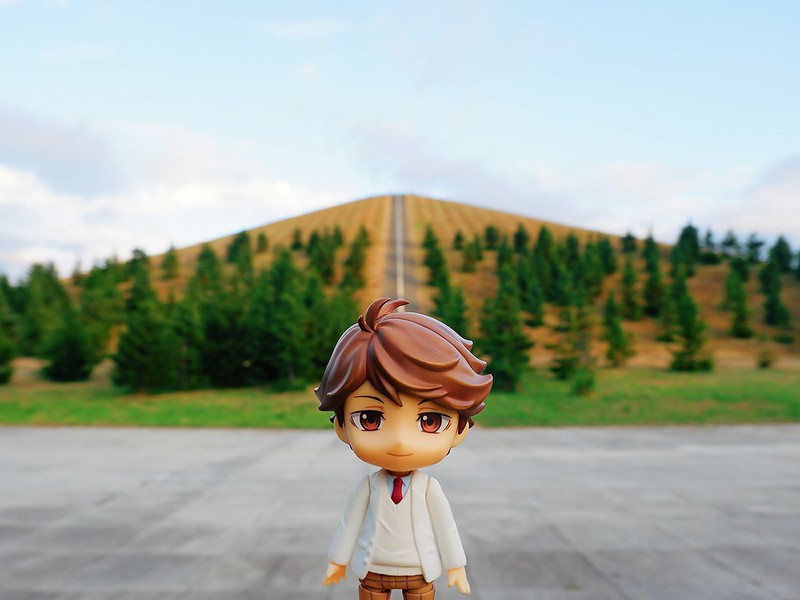 There are five routes to reach Mount Moere peak and I chose the staircase, which is the most direct way. Mount Moere is the best viewpoint in Moerenuma Park in my opinion. At 62-meter-tall, the manmade hill is the tallest structure in the area and offers sweeping vistas of Moerenuma Park’s geometric installments as well as Sapporo skyline. 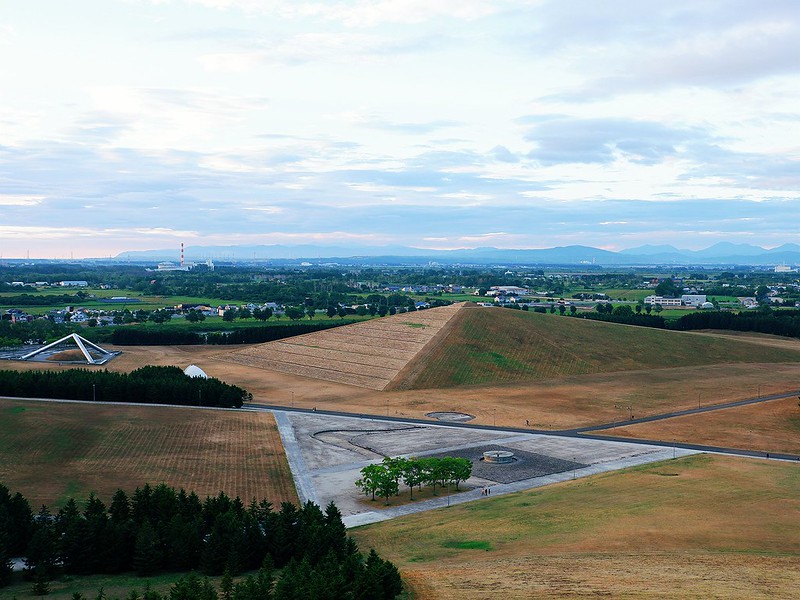 Amazing how Play Mountain, Tetra Mound, and Music Shell look so small from the top of Mount Moere. The triangular Aqua Plaza has daily fountain shows, but due to the pandemic, the 25-meter-tall Sea Fountain was suspended when I visited. 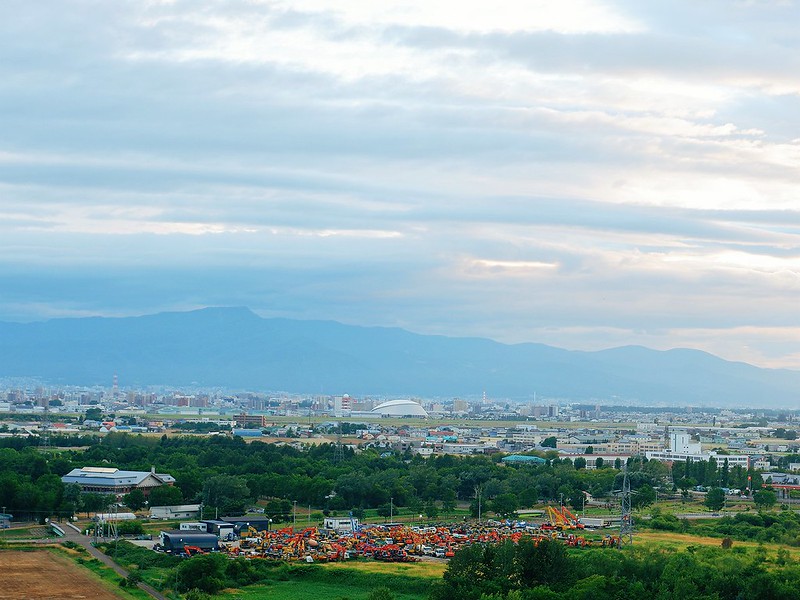 Sapporo Dome and real mountains around Sapporo in the background. 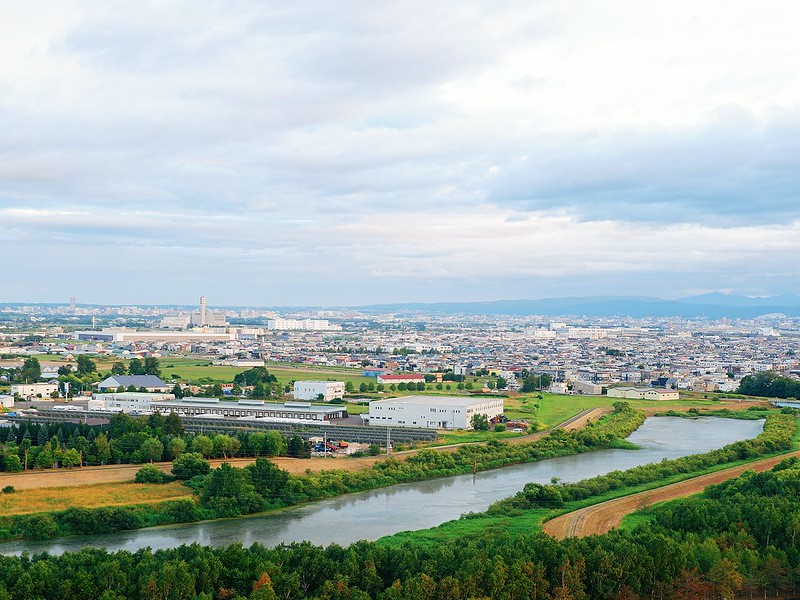 With a circumference of around four kilometers, Moerenuma Park is so big that it is recommended to get around by biking. It was still bright out in the evening because I visited in summer, but rental bicycle service in the park was already closed for the day, so I couldn’t fully explore the park. There are still playground with many artistic play equipment designed by Isamu Noguchi and sports facilities. In spring, visitors can bike to the Forest of Cherry Trees too.

I walked down Mount Moere using a different path. It was a slope that curves around the mountain. In winter, Mount Moere and Moerenuma Park become a winter sport spot. You can enjoy skiing and other snow activities there, with equipment available for rent. 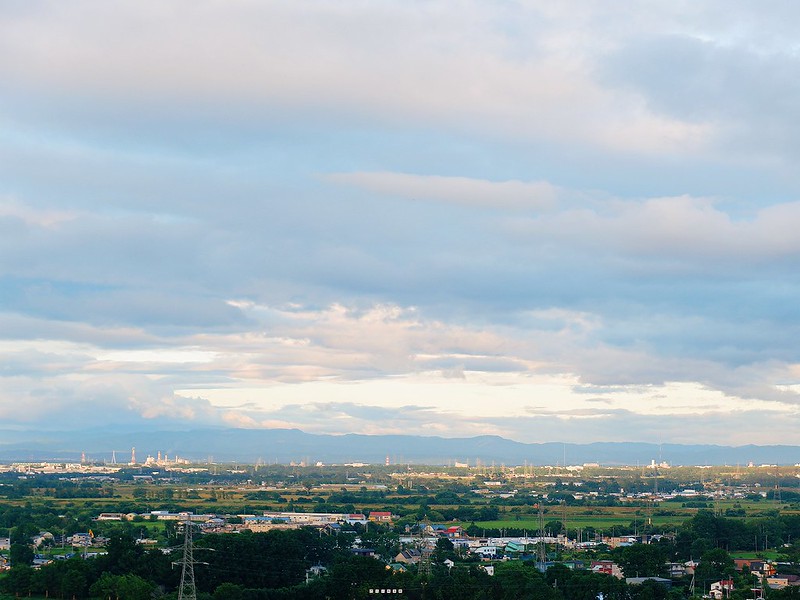 The hills of Makomanai Takino Cemetery and Moerenuma Park may be small compared to natural mountains, but I found the stories behind them inspiring and they represent great dreams and determination of their creators and local Sapporo people. Please go visit the cemetery and the park if you have a chance to go to Sapporo.

Makomanai Takino Cemetery
When to visit: Makomanai Takino Cemetery can be accessed every day, from 8.30am-5pm in April-October and from 9am-3.40pm in November-March. However, the Hill of Buddha has shorter opening hours, from 9am-4pm in April-October and from 10am-3pm in November-March.
How to get there: From Sapporo Station, take Namboku Line Subway to Makomanai Station. Walk a short distance from the subway station to the adjoining bus station and take Sapporo Chuo Bus No. 102 to Takino Reien (Takino Cemetery) Bus Stop. You can see the bus schedule here.
Entrance fee: No admission fee for the cemetery grounds, so you can see the Moai statues and the Stonehenge replica for free. However, 300 yen is charged if you want to enter the Hill of the Buddha.

Moerenuma Park
When to visit: Moerenuma Park actually has East, West, and South Entrances, but I recommend entering via the East Entrance because it is open for the longest and all-year-round and it is closest to the highlights as well. The East Entrance is open from 7am-9pm every day.
How to get there: From Sapporo Station, take Toho Line Subway to Kanjo-dori Higashi Station. Then take Higashi 69 (East 69) or Higashi 79 (East 79) local bus to Moerenuma Koen Higashi-guchi (Moerenuma Park East Entrance) Bus Stop. From there, you can walk to Hidamari Glass Pyramid and other mountains in 15-20 minutes.

* I am sorry for being even slower with replying and catching up with everyone’s beautiful photos and posts lately. I have been very busy IRL, but I hope I can come back to your posts tomorrow or within a few days from now. Please take care.

17 thoughts on “Sapporo, Japan: Art of the Hills”

I had the opportunity of a lifetime to study in Nagoya, Japan, from 2019-2022 and I really love traveling in Japan, so this blog features mostly Japan travel content with some personal reminiscences of my time there. I am now back to working in Bangkok, so I only go on a journey occasionally and write slowly, but my love for traveling will last indefinitely and you can also expect occasional travel content about Thailand and other countries.

I believe our “space” exploration leads to interesting “stories” that are waiting to be told. This blog marks my beginning as a travel storyteller. I focus on honesty and details and add a lot of personal thoughts and photos (both digital and film) to my posts. If these are your things, I hope you enjoy my tales about places and people and that they can inspire you to explore space and discover your own stories.